Australian CPI Dampens Chances of RBA Rate Hike –  NZDUSD bucked the trend overnight, as most other currencies managed to retrace some of their declines against the USD. The pair hit fresh lows around the 0.71125 mark after it gapped lower through the 0.72000 level over the weekend. The strength in the USD is continuing to make its mark, but after large moves, a retracement could be on the cards. US Treasuries declined a little overnight, halting the slide in FX. WTI has moved back higher after declining early yesterday in response to US Rig count data on Friday. Equity Indices advanced overnight as the risk-on theme continues.

Australian Consumer Price Index (QoQ) (Q1) came in at 0.4% v an expected 0.5%, from 0.6% previously. RBA Trimmed Mean CPI (QoQ) (Q1) came in as expected at 0.5%, from a prior 0.4%. This data has been declining and continued to do so this quarter, showing some weakness in the economy, meaning the RBA will be unlikely to raise rates soon. AUDUSD bounced from a low of 0.75784 to 0.76132 in response, after sliding lower due to USD strength in the build-up to the release. However, AUD should weaken as rate hikes are delayed.

US Existing Home Sales (MoM) (Mar) was 5.60M v an expected 5.55M, against 5.54M previously. After reaching a seven-year high in November at 5.81M, this data point had slipped lower over the following two months, signalling a little softness in the sector, but had recovered somewhat last month. The recovery continued with this reading, as activity picks up heading into summer. USDJPY continued its rise as the data was released, moving from 108.366 to 108.454. 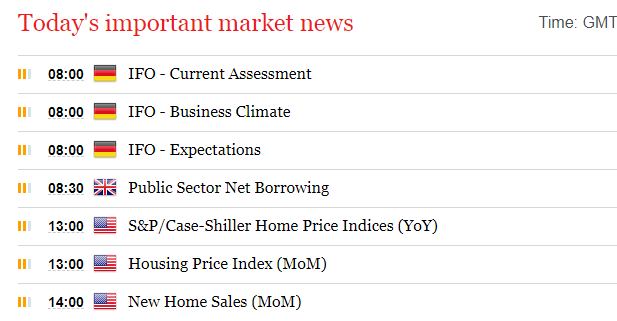