Bank of England, US payrolls – The string of do-nothing central bank meetings, which may or may not have ended with last week’s Bank of Japan meeting, is set to come to an end for sure this week with both the Reserve Bank of Australia (RBA) and the Bank of England (BoE) expected to cut rates. The other big event of the week is, as usual for the first week of the month, the US nonfarm payrolls, which are expected to fall back to a more normal level after June’s abnormally high figure. We also get the final PMIs for July, including today’s announcement of the PMIs for China. Outside of the data, participants in all markets will be watching the oil price.

The RBA is widely expected to cut rates again.The reason is simple:  following their last meeting, Gov. Stevens ended his statement by saying, “Over the period ahead, further information should allow the Board to refine its assessment of the outlook for growth and inflation and to make any adjustment to the stance of policy that may be appropriate,”  which indicates that some change in policy was likely. The “further information” came about a week later, when 2Q headline inflation was reported to have slipped further on a year-on-year basis. The market puts a 67% probability on a cut this week, while 20 out of 25 analysts polled by Bloomberg expect a cut. Those are pretty good odds but still not certain, which means AUD may weaken a bit if they do cut. 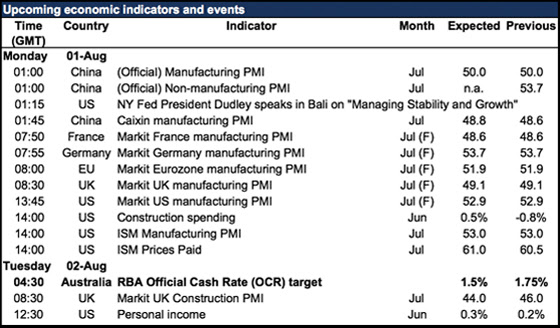 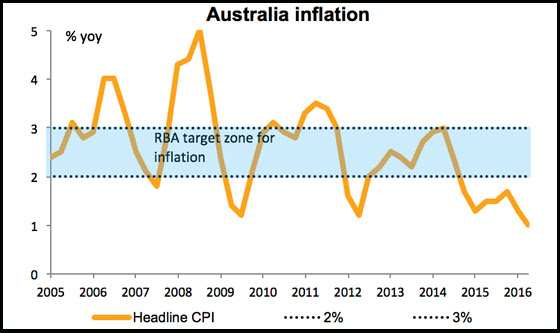 The question about what the BoE is planning to do is more complicated. There’s no question that the BoE is going to do something, after a string of weak post-Brexit data convinced one of the two last hawks (Martin Weale) to change his mind and come out in favor of an immediate shot of stimulus. The market is pricing in 100% chance of a cut, with the vast majority of economists forecasting a 25 bps cut to 0.25%. The market sees SONIA bottoming out at 10 bps by next March. There’s more debate about the asset purchase program:  while most economists see that remaining unchanged at 375bn, some are forecasting an increase up to 525bn. A cut in rates and no change in the asset purchase program is now fully priced in; it will take more than that to cause GBP to weaken further. 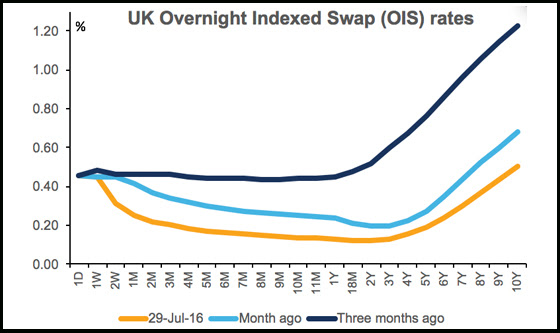 Source: Fxempire Forex Broker (Review and Forex Rebates Up to 85% )