Crude Oil Forecast – The WTI Crude Oil market initially fell during the day on Wednesday, but found enough support at the $48 level to turn things around and form a bit of a hammer. The market of course forming a hammer is a good sign for buyers, as it shows that they are willing to return to the market every time we pullback. Even if we broke down below the bottom of the hammer, which is technically a negative sign, we are not willing to sell this market as the $46 level below should be even more supportive. Longer-term, it looks as if we are trying to grind towards the $50 level, which is a large, round, psychologically significant number. In fact, it was the scene of massive resistance during the month of October 2015. With that, it makes sense that the market will trying to test that area. 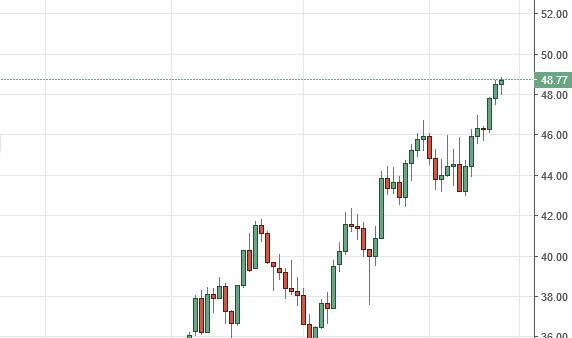 Brent markets did much the same during the day, initially falling down but turning back around to form a hammer. The hammer of course is a bullish sign and sits just below the $50 level. The $50 level of course is a large, round, psychologically significant number, so breaking above there might take a little bit of effort. If we can break above the $50 level, I feel that we will then try to reach towards the $54 level which is the top of the resistive area.Ultimately, this is a market that will try to reach towards the $54 level, but it will more than likely mean quite a bit of volatility between here and there. At this point in time, we prefer to buy short-term pullbacks as potential short-term trades. The market showing volatility would simply offer us more and more opportunities going forward. On the longer-term charts, we will pay attention to whether or not we get an exhaustive candle, but until then we have no interest in shorting this market as the buyers have most certainly taking control. All things being equal though, you are going to have to be able to deal with quite a bit of turbulence.