Crude Oil Forecast  –  The WTI Crude Oil markets tried to rally during the course of the day on Wednesday, but struggled enough to turn things back around and form a bit of a shooting star. The shooting star of course is a negative sign, and the fact that it formed just below the $50 level suggests that we are going to struggle to get above the $50 level. However, it is somewhat likely that we continue to go above and continue to grind even higher. In the short-term though, it looks as if the market will probably try to find the $48 level, an area where we had seen quite a bit of bullish pressure. Ultimately, I do think that this is simply a momentum building exercise, and as a result it would only be a matter time before the buyers return. Ultimately, I think that the “floor” in this market is somewhere close to the $46 handle. 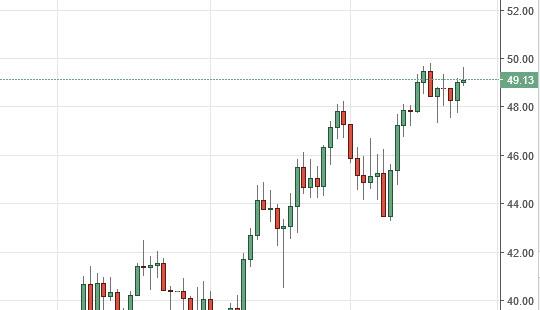 Brent markets did much the same thing, trying to rally but struggled at the $50 region. Ultimately, we ended up forming a shooting star for the daily candle, and of course that is a negative sign. If we pullback from here though, there should be more than enough support below, somewhere near the $48 level. There should be quite a bit of support all the way down to the $44 level, so ultimately this should be a market that finds buyers again and again.The $50 level above being broken could send this market looking for the top of the $54 level, which is the area in which we see quite a bit of resistance, and with that it would be a substantial sign that the longer-term “buy-and-hold” traders will be comfortable going long. Pullbacks at this point in time will have plenty of support in our estimation, so therefore this is a “buy only” type of situation we find ourselves in as far as the petroleum markets are concerned at this point in time. However, in the meantime it will probably be a lot of short-term trading.