Crude Oil Technical Analysis – The WTI Crude Oil markets gapped lower at the open on Monday, as the meeting in Qatar failed to produce any type of agreement. There are still concerns about oversupply, and the fact that we will not see any type of production freeze suggests that oil markets could struggle a bit. However, demand has been picking up lately, so there should be a continued back-and-forth type of fight when it comes to this marketplace. The fact that we found quite a bit of bullish pressure underneath to form what looks like a hammer suggests of course that there is going to be a lot of struggle in this market. At best, we are probably looking at short-term trades and scalping of this market as although there was a lot of bearish news over the weekend, the reality is that this market has been acting on several different factors for some time.

Brent markets did very much the same thing, initially gapping lower, then turning around to form a bit of a hammer. Because of this, it seems as if the markets will probably continue to struggle and go back and forth during the course of the next several sessions, as this market will certainly have a lot to think about when it comes to the lack of a production freeze, and of course the uneven amount of demand for the commodity itself.There are still concerns about the fact that most oil-producing countries are producing at record output, and that of course is going to demand a much larger increase in demand, but ultimately this is a market that is trying to rebalance itself, and doing so will more than likely be very choppy to say the least. We don’t really see an opportunity to trade this market for any real length of time, and realize that scalping is probably about the best thing that you can do in this type of scenario as the market will continue to struggle with various problems at the same time. Quite frankly, trading crude oil is going to be very dangerous for a while. 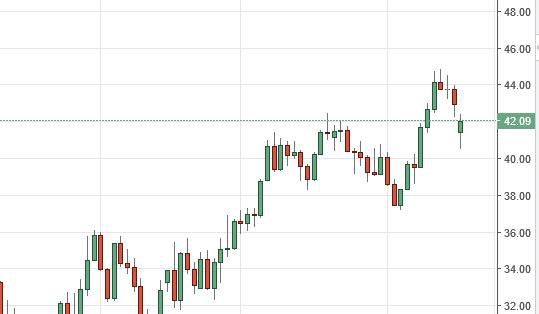