Daily Forex Market Preview – The dollar rose to an eight month high against the yen during a holiday thin trading session yesterday. Earlier today, the BoJ’s gauge of inflation showed core inflation rising 0.3% from a year ago in October, improving from September’s print of 0.2%. Official government data showed inflation excluding fresh food falling 0.4% in October however. 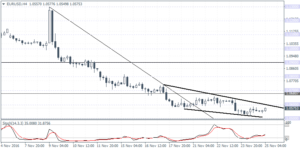 EURUSD (1.0575): EURUSD closed yesterday’s session with a proper doji coming off the previous day’s strong declines which saw the single currency breakdown below 1.0600. The failure to test 1.0500 support and a bullish close today could signal the much anticipated reversal in EURUSD. Resistance is seen at 1.07650. On the 4-hour chart, EURUSD is seen consolidating at the current levels. Look for a close above 1.0600 for the price to extend gains towards 1.07650 over the coming days. The 4-hour Stochastics also shows a bullish divergence which will be confirmed is support is formed at 1.0600. 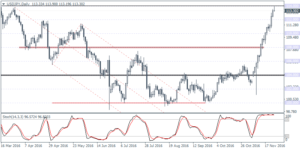 USDJPY (113.30): After rising to an 8-month high, USDJPY is currently making a minor pullback. Resistance comes in at 114.00 which was previously tested in late February/early March this year.

Establishing resistance here could signal a potential retracement to the rally as support near 108.00 could be tested. However, it is best to remain on the sidelines and wait for further clues on the daily chart time frame. 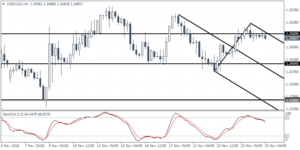 USDCAD (1.3485): USDCAD’s doji closing yesterday could signal a near-term decline as prices are likely to fall towards 1.3255 – 1.3285. However, for this to be validated a bearish close today is essential and preferably below last week’s low of 1.3400.

The newly plotted median line could confirm this view as the price could test 1.3400 support. However, the bearish bias will be invalidated if USDCAD closes bullish above 1.3500 which could signal further upside continuation with the eventual target towards 1.3800.

The usual bridge day between Thanksgiving and the weekend arrives which will keep volumes light and ranges on the tighter side, all being well. That’s unless you are a retailer, in which case this is known as ‘Black Friday’, a phenomenon that has crossed the Atlantic in recent years. Overnight we’ve seen inflation data from Japan released, which showed prices rising by a firmer than expected 0.1% YoY, although the BoJ’s favoured measure (ex-fresh food) remains firmly in negative territory at -0.4% YoY. Sterling will have one eye on the release of revisions to Q3 GDP, which initially showed a 0.5% gain.

The pound continued its positive run yesterday, cable holding above trendline support, with EURGBP holding onto the recent downtrend and the move below 0.85. The strong dollar tone has also undermined gold, with the push below 1200 being sustained yesterday. This has proven to be a key level of support in recent weeks and months, which now turns into near-term resistance.

We do see some minor US data later today in the form of Services PMI at 14:45, with trade data before that at 13:30 GMT. Neither are major market events and for now at least, we are seeing a more consolidative tone to the dollar, which has corrected lower and more so against the Aussie, kiwi and yen. There are no speaker either side of the Atlantic scheduled for today who are likely to impact currencies.

Source: Fxpro Forex Broker -Review and Forex Rebates Up to 85%