Daily Forex Market Report – The ECB monetary policy meeting yesterday saw the euro give up its intraday gains to close on a bearish note. As Draghi signaled that the central bank would need time to assess the monetary policy situation, the euro plunged and is now trading near the levels were last seen in January this year. Still, the declines are likely to be limited in nature as the US dollar approaches the key resistance level near 98.50. With the week coming to an end, the main catalyst for the markets will be next week which will see the US advance GDP report that could be the main event risk.

The dollar was hovering at fresh seven-month highs against the other major currencieson Friday, as comments by European Central Bank President Mario Draghi weighed on the euro and sustained expectations for a 2016 U.S. rate hike supported the greenback.

The single currency weakened broadly after ECB President Mario Draghi said on Thursday that an adjustment to the bank’s stimulus program could come in December, saying its assessment would benefit from new economic projections to be drawn up by ECB forecasters.

The comments came after the ECB left interest rates unchanged at record lows of zero earlier Thursday and kept the deposit facility rate at -0.4%.

Earlier Friday, Bank of Japan Governor Haruhiko Kuroda said the central bank may push back the timing for hitting its inflation target.

Kuroda did not indicate how such a delay could affect the BOJ’s policy decision, but he said that the bank’s bond purchases may slow in the future if 10-year bond yields fall well below its target of around zero percent.

The U.S. dollar index, which measures the greenback’s strength against a trade-weighted basket of six major currencies, was up 0.13% at a fresh seven-month high of 98.42. 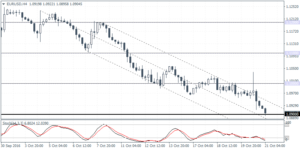 EURUSD (1.0968): EURUSD was bearish yesterday despite the modest attempt to test 1.1000 resistance level that was quickly rejected. Price action is likely to settle lower near 1.0900 as we see currently and this marks the completion of the head and shoulders pattern. A correction to the upside, therefore, cannot be ruled out. While 1.1000 resistance level will be challenged initially, the further upside can be seen coming above this level towards 1.1100. To the downside, price action could be seen consolidating near 1.0900 – 1.0850. 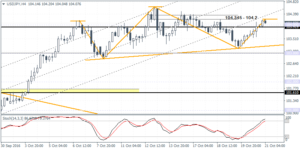 USDJPY (104.07): USDJPY closed back near the 104.00 level yesterday moving back into the inside bar range level established from last week. Price action continues to evolve into the head and shoulders pattern which has been redrawn with price action currently trading near the previously identified resistance level of 104.34 – 104.20. A bearish follow through is required here to ascertain the downside bias which puts the downside bias to the 101.61 – 102.00 support level. The Stochastics oscillator is seen near the overbought level currently, and a lower high formed here could signal the downside. Alternately, with the previous 4-hour session closing bullish after the doji, further upside could be expected. A daily close above 104.34 will invalidate the bearish bias, although USDJPY primarily remains range bound. 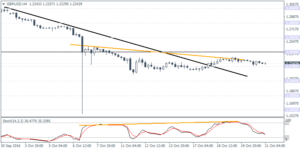 GBPUSD (1.2243): GBPUSD has been gradually inching lower following the doji reversal two days ago. The British pound could be seen dipping lower towards the support at 1.2200 which marks the retest of the breakout from the trend line. The Stochastics oscillator is also seen completing its correction following the hidden bearish divergence. Thus, if support at 1.2200 is established, GBPUSD could be looking to the upside, targeting 1.2400. The bullish bias could be invalidated if price breaks down below 1.2200 in which case, the price could be seen testing the previous lows at 1.2123 with further downside in sight.