Daily Forex Markets Brief – The global equity markets are bracing themselves for a stormy closing session this week, as data from Thomson Reuters’ Lipper unit shows US fund investors withdrew the largest amount from US-based equity exchange-traded funds on record.

The amount totals $23.9 billion coming out of equity ETFs in the week. The reason cited by the research unit was the overbought conditions, with a correction overdue. Asian stock markets fell overnight, as the Nikkei finished down 2.32% at 21382.62, but off the session low of 21119.00. The Chinese Shanghai Composite was down 5.07% at the time of writing, off its low of 6% earlier. Last Friday saw substantial selling, as fear took over, with a stronger follow through on the market open Monday.

German Buba President Weidmann spoke on Monetary Policy in the European Context at the Monetary and Economic Policies on both sides of the Atlantic conference in Frankfurt. He said that a substantial extension of ECB QE is not justified if growth continues as expected.

Euro appreciation is unlikely to jeopardise expansion and there is no sign of Eurozone growth abating anytime soon. The recent German wage deal supports expectation for gradually rising inflation. ECB policy should not remain loose beyond QE and should not be unsettled by the recent stock market sell-off.

RBA Governor Lowe spoke at the A50 Australian Economic Forum in Sydney. He stated that there is no strong case for near-term adjustment in policy and that rates will only rise on further progress with jobs and inflation. He added, it is likely that next Australian interest rate move will be up and quarterly economic forecasts are largely unchanged, and that progress in cutting the jobless rate and lifting inflation will be gradual.

Volatility in stocks hasn’t affected the RBA growth outlook, he said, and Australia does not have to tighten in ‘lock-step’ with other central banks. The RBA are still carefully watching high household debt levels and the forecast for GDP growth is a bit above 3% over the next two years. Finally, a lift in wage growth is ‘likely to be necessary’ to meet inflation goals.

The Bank of England Interest Rate Decision was left unchanged at 0.5%, as expected.

The BOE Minutes, BOE Quarterly Inflation Report and the Monetary Policy Statement were released at the same time and the BOE Asset Purchase Facility was maintained at £435B. The BOE MPC Vote remained unchanged at 9. GBP crosses saw a spike in volatility after this data was released.

US economy and FOMC

US FOMC Member Kaskari spoke in South Dakota, saying it’s too soon to know if tax cuts will boost wage and hiring. Trust in the US may eventually erode amid rising debt. Deficit and debt are not currently near-term issues but this may change. The US is a long way away from wages and inflation rising. There is consistent wage growth needed to have an impact on rates. The bond market is signalling inflation is going to be under control, well into the future. If the tax cut does not lead to more optimism, it could be a net positive for the US economy.

Canadian BOC Governing Council Member Wilkins spoke on innovation and inclusive growth at the G7 Symposium in Quebec. She stated that high household debt is the biggest vulnerability to the economy, followed by NAFTA. The BOC is also factoring in the rest of the economy’s performance as it sets policy. Some households may find debt service extremely difficult but, overall, the bank expects economy and consumption to continue to grow. The quarter didn’t get off to the strongest start, in line with expectations; the bank is data dependent.

The rising stock market volatility, in the context of a strong economy and rising bond yields, is to be expected. The asset prices feed through to monetary policy transmission mechanism and forecasts but this only matters to the extent they are in one direction and large. The bank looks at market pricing but it is rarely a source of concern and the focus is on setting the right policy to achieve its inflation target. There is often more potential being built in an up cycle than economists put in their projections.

At 10:30 GMT, the Russian Interest Rate Decision will be released. The expectation is for a drop to 7.50% from 7.75%. This could affect the pricing in RUB crosses.

At 16:45 GMT, UK MPC Member Cunliffe will be speaking at the Asset Management Derivatives Forum in California. GBP crosses may experience volatility around this time in reaction to his comments.

At 18.00 GMT, the Baker Hughes US Oil Rig Counts will be released, with a headline number from last week of 765. The expected number this week is 758. WTI Oil could become volatile around this data release and will be in traders’ minds when trading resumes on Monday. 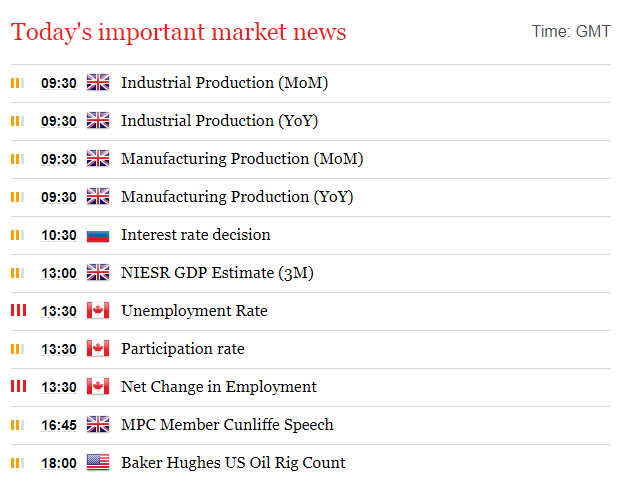 Open a real account and receive 4.25$ rebate Per Lot