The European day starts off with EU industrial production for February. January was the largest mom increase in over five years, although it’s likely to be revised down along with the figure for Germany. Thus some mean reversion would be natural in any case. On top of that, with the PMIs for February falling back, it’s quite likely that IP will fall too. This could be EUR-negative. However, the business surveys recovered somewhat in March, so it’s not clear how much weight the market will put on the February data. 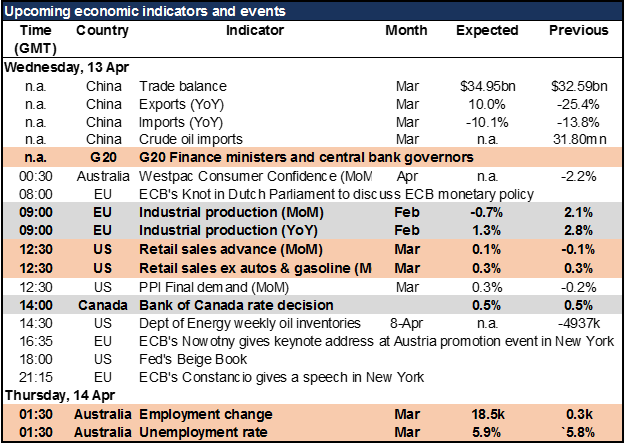 Next is US retail sales for March, a key indicator for the US economy. The consumption data has been a big disappointment so far this year, and March is not expected to be much brighter. The headline figure is forecast to improve somewhat because of higher gasoline prices, although auto sales were down sharply so there could be a negative surprise. Excluding autos and gasoline, sales were forecast to have grown at the same pace as in the previous month, which would tend to beneither here nor there for the FX market.

The big event of the day is the Bank of Canada rate decision. The market expects no more moves from the Bank this year, so the focus will be on the tone that they take. The main point will be the BoC’s assessment of the new government’s budget, which forecast a deficit of CAD 29.4bn, CAD 11bn more than estimated in February. The market will want to see whether the Bank agrees with the government’s estimate that the budget measures will boost GDP by 0.5 ppt. Another focus will be the impact of these measures on the Bank’s estimate of the output gap, the key to assessing its view on inflation. If they agree with the government’s optimistic view, we could see the Bank shifting from a loose to a neutral bias, which would be CAD-positive. On the other hand, the Bank is relying on a weaker CAD to facilitate export-led growth but the CAD TWI has risen some 3% since the last meeting on March 9th. They may therefore counter any more optimistic tone on the economy with negative comments about the exchange rate.