Data released on Thursday indicated that U.S. private employers hired fewer workers than expected in June and applications for unemployment benefits last week increased for a 3rd straight week. It would therefore appear that there is some “cooling” in the US Labour Market as it approaches full employment. The ADP National Employment Report indicated that private sector payrolls increased by 158K jobs in June, down from the 230K positions created in May and below many expectations for a gain of 185K. As a result of these lackluster figures, that are often correlated with Non-Farm Payroll data, USD was sold off during the day. 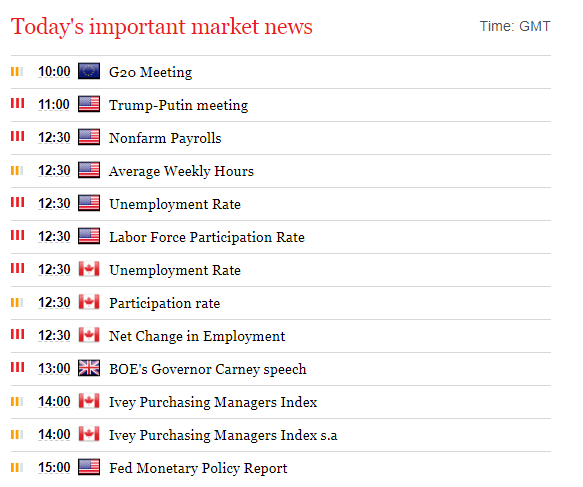 The G20 meeting starts today in Hamburg, Germany. Of note, will be the first meeting of President Trump and President Putin as well as his first meeting with his Chinese counterpart Xi Jinping. Trade discussions will be “strained” as many have criticized the US’s protectionism stance.

After some early USD buying that saw USDJPY trade up to 113.468, the bears entered the market pushing USDJPY down to 112.882. Since hitting that low USDJPY has retraced to trade above yesterday’s highs, currently trading at 113.70, as the Bank of Japan announced its first unlimited fixed-rate bond purchase since February.

GBP benefited from USD selling as it climbed from a low of 1.29192 to post a 0.3% gain on the day to reach a high of 1.2983. GBPUSD is currently trading at 1.2955.
CAD remains strong against USD as the markets have priced in a rise in Canadian interest rates sooner rather than later. USDCAD traded 0.2% lower to establish a low of 1.29227 on the day before retracing higher. Currently USDCAD is trading around 1.2990.
Gold seems to have stabilized above a technical support area around $1,219 and traded as high as $1.229.10 on Thursday before retracing back to currently trade at $1,220.50.

After falling 4% on Wednesday, as Russia claimed to be opposed to any additional production cuts, Oil recovered as the EIA reported Crude Oil inventories falling to 6.299 Million, significantly more than the expected draw of 2.283 Million. US strategic oil reserves are now at a 12-year low, but increased Shale production provides “insurance” against potential shortages i.e. the US does not need to store as much Oil as it used to. The initial reaction to the report saw WTI trade up from $45.80pb to $46.62pb (a 1.5% gain on the day) before retracing back to close near $45.50pb. WTI has given up yesterday’s gains to currently trades around $45.15

Markets have been waiting for today’s Non-Farm Payroll release with much anticipation. The recent tightening by the Fed, and their less hawkish tone of late, ensures that market sentiment will change dramatically if this release is wildly outside of the market consensus of 179K. Following May’s weak and disappointing release of 138K, the Fed will be looking to see if this release further indicates a weakening economy, which will further impact the Fed’s economic “strategy” for the remainder of this year.

US Unemployment rate (Jun) will also be released. The figure is expected to remain at 4.3%, however, if the US labour market is tightening, we can expect to see a higher release which will further impact US economic policy is the coming months.

Canadian Unemployment (Jun) is expected to remain at 6.6%. Any dramatic change from this expectation will impact Canadian economic policy as the markets are fully expecting an imminent rate rise, possibly as early as next week.

At 14:00 BST Bank of England Governor Carney is scheduled to speak which is likely to cause volatility in GBP.