The US Labour Department released Jobless claims data, on Thursday, showing a drop of 15K for the week ended July 15th to 233K. This was the lowest level for 5 months and is a strong indication of a strong job market. The US labour market is at near “full employment” with the latest jobless rate at 4.4%. With such a robust set of data the markets believe this will likely keep the Federal Reserve on track to hike rates later this year and start to reduce its large bond and mortgage back securities portfolio.

The ECB Monetary policy statement and press conference was held on Thursday with President Draghi acclaiming European growth. The ECB kept its easy monetary policy unchanged, as expected, with President Draghi stated “incoming data confirmed the strength of the euro zone’s economy” even though he simultaneously pledged additional stimulus if needed. And more political woes for President Trump as reports suggest that US Special Counsel Robert Mueller is expanding his investigation of President Trumps financial dealings – coming just a day after Trump told the NY Times that “any digging into his finances would cross a red line”.

And more political woes for President Trump as reports suggest that US Special Counsel Robert Mueller is expanding his investigation of President Trumps financial dealings – coming just a day after Trump told the NY Times that “any digging into his finances would cross a red line”.

Following the ECB statement EUR rallied close to 1% against USD as EURUSD hit a high of 1.16568 on the day, the strongest it has been in 23 months. Currently EURUSD is trading around 1.1635

JPY weakened slightly against USD following the Bank of Japan’s announcement that they will maintain stimulus. USDJPY traded to a low on Thursday of 111.754, its largest decrease in nearly 2 weeks, before retracing to currently trade around 111.92

AUDUSD traded lower following the monthly jobs report for June showing a surge in full time employment. AUD is the best performing G10 currency rising 10% in 2017. However, RBA Deputy Governor Debelle stated in a speech that “there was no significance in the board discussing the neutral rate” which caused AUD to weaken. AUDUSD is currently trading around 0.7910

With a burgeoning global supply, Oil surprisingly maintained its recent strength with WTI gaining 0.6% on the day. Currently WTI is trading around $46.98pb
Equity Indexes rose on Thursday with the UK100 gaining 0.6%, to trade at his highest level in a month, at 7502.69 whilst Germany30 saw its largest rise in almost a week.

At 11:30 BST the Office of National Statistics (ONS) will publish UK Borrowing data for June. As we are in the early stages of the financial year it is usually very difficult to draw any meaningful inferences on the state of public finances.

At 15:30 BST Statistics Canada will release Consumer Price Index (YoY) (Jun). The market consensus is for 1.1% which will improve on the previous 1.3% reading. The Bank of Canada has targeted that inflation stay in a 1% to 3% range. If the release is significantly lower, we can expect the pace of future interest rate rises will be slowed. 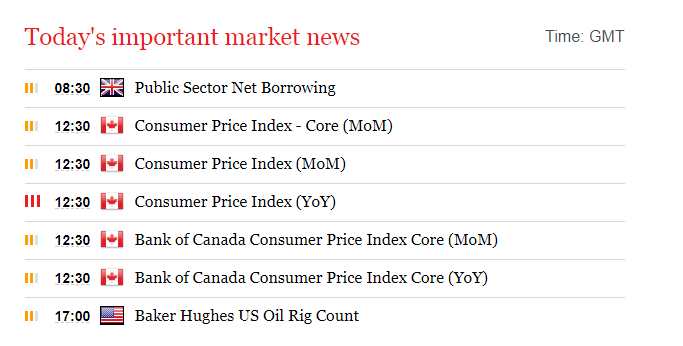