Daily Forex News and Analysis – As discussed yesterday, markets will increasingly obsess about the US election over the coming few weeks, but beneath that the economy will determine if the Fed hikes interest rates before the year is out.

After the last meeting, the chance of an increase in rates by year end was out over 60%, with that reading having now decreased to 50%. This shift in expectations has, in part, underpinned the weaker dollar seen over the past few sessions.

For all the headlines about the election, the Fed is focuses on the economy and the messages on that have been mixed since the Fed meeting. It also has to be said that whilst the election result looks to be so close, the market will struggle to fully price in an US rate increase by year end.

A Clinton victory could seal it, whilst the uncertainty caused by a Trump win could well reduce the chances of a December move. Like it or not, politics and economics are going to be ever more interlinked in this scenario. Leaving all that aside, the calendar for today is on the light side, with just US durable goods data at 12:30 GMT.

Note that we have some speakers in the form of ECB’s Draghi at 09:00 GMT, together with BoE’s Shafik just after 08:00 GMT. Oil prices are sagging below the USD 45pb level as expectations are downplayed by the Saudi’s ahead of the OPEC meeting in Algiers.

There are signs of ground being gained in terms of accepting higher output elsewhere, which is why the oil price has sagged, but a significant push lower looks unlikely for now. Sterling continues to flirt with the 1.30 level on cable, whilst USDJPY is also having a torrid time with the 100 level.

The US dollar is looking to make a comeback with price action showing a positive close yesterday as flash services PMI came out higher than expected while US consumer confidence continued rose to 104.10, helping to lift the US dollar. Today, the markets will be tuned into Yellen’s testimony and economic data which includes US durable goods orders. Besides Yellen’s speech, Draghi and FOMC’s Bullard are also due to speak. 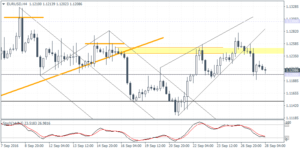 EURUSD (1.1208): EURUSD closed just above 1.1200 handle yesterday with the previous numerous attempts to test 1.1300 having failed. Price action remains strongly range bound, and a convincing close below 1.1200 could signal further declines. On the 4-hour chart, we can see prices currently bouncing off the 1.1200 support. To the upside, a retest of the breakout level of the rising wedge pattern could offer a valid move with the potential for prices to drop lower. Watch for 1.1151 support to the downside. A breakout above the previous resistance of 1.1250 – 1.1239 could, however, put this downside bias at risk. 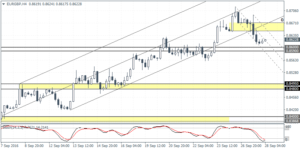 EURGBP (0.8622): EURGBP broke out from the median line yesterday failing to offer any pullback. However, following the breakout from the median line, we still expect a minor pullback into the price zone of 0.8671 – 0.8648. A reversal in this level could confirm the downside bias, for a test to 0.8600 followed by 0.8500 if the primary support fails to hold prices. On the daily chart price action closed bearish yesterday with a shooting star candlestick pattern being formed. 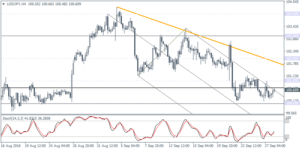 USDJPY (100.60): USDJPY remains trading close to the 100.00 support level, and we could expect to see another minor rally in prices. Resistance at 102.00 remains in sight as the price level also coincides with the daily chart’s falling trend line which forms the descending triangle pattern. Therefore, the bias in USDJPY remains to the downside on a possible breakout below 100.00. On the 4-hour chart, price action is currently attempting to breakout above 100.61 Yen minor support level which has seen prices consolidating over the past few sessions. Above 102.00, further gains can see USDJPY potentially test 103.00 major resistance.

Fxpro Forex Broker -Review and Forex Rebates Up to 85%

Orbex Forex Broker – Review and Forex Rebates Up to 85%