Daily Forex News and Analysis – The Australian Bureau of Statistics released the consumer price index data for the third quarter. Official records showed that CPI advanced 1.3% on the year in the third quarter of 2016, exceeding forecasts of 1.1% and gaining from the one percent increase from the previous quarter.

On a quarterly basis, inflation rose 0.7% beating forecasts of 0.5% and rising from 0.4% in Q2. Although inflation is still low and below the RBA’s inflation target, the improvement in CPI from a year ago and on a quarterly basis is reason enough to keep the RBA on hold at its meeting next week, which should offer some support to the AUD in the near term. 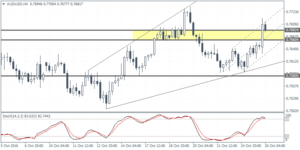 AUDUSD (0.7681): The Australian dollar advanced its gains yesterday and is seen maintaining the bullish momentum after the quarterly inflation report that was released today. However, the 4-hour chart shows the AUDUSD moving in a widening wedge pattern with price closing above the 4-hour resistance zone of 0.7682 – 0.7660.

We could expect the price to remain consolidated near the current levels, but the upside momentum is seen weakening. A close below the resistance zone’s low of 0.7660 could signal near term declines towards 0.7580. Watch for a median line failure plotted within the broadening wedge pattern for early clues as AUDUSD looks to post declines if price fails to hold up above 0.7682.

Comment: the RSI is bullish and calls for further upside. 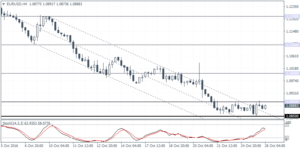 EURUSD (1.0888): EURUSD dipped to lows of 1.0850 yesterday and closed modestly bullish and in the process formed a doji outside the bar. A follow through to the upside from here could mark the start of price correction to the upside subject to 1.0900 minor resistance which needs to be cleared. On the 4-hour chart, the Stochastics has moved up strongly, forming a higher high against the lower high in price which indicates a near term sideways price action between 1.0900 and 1.0850. The bias to the upside can be seen strengthening only on a close above 1.0900, while 1.0850 remains in focus but the downside could be limited for now. 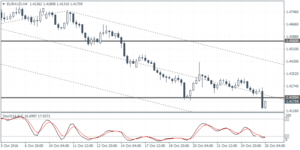 EURAUD (1.4175): EURAUD broke down below the previous low at 1.4200 yesterday, but the 4-hour Stochastics is showing a bullish divergence at the current level. A close above 1.4200 could signal near term upside in prices. The short-term corrective move towards 1.4560 marks the retest of the weekly chart’s descending triangle pattern as resistance could be established at 1.4560.

The Australian dollar rose on Wednesday after data showing a stronger than expected rebound in domestic inflation in the last quarter quashed expectations for a near-term interest rate cut by the country’s central bank.

Official figures showed that Australia’s consumer price index rose 0.7% in the third quarter, compared to expectations for an increase of 0.5%.

The annual rate of underlying inflation also edged up, rising to 1.6% from a record low of 1.5%.

Subdued inflation readings in the first and second quarters prompted the Reserve Bank of Australia to cut interest rates in May and August, bringing interest rates to a record low 1.5%.

The greenback backed away from nine-month peaks hit overnight, but continued to be underpinned by expectations for a near-term interest rate hike.

The U.S. dollar index, which measures the greenback’s strength against a trade-weighted basket of six major currencies, was last at 98.57, after hitting highs of 99.09 overnight, its highest level since February 1.

The index has rallied more than 3% so far this month as hawkish remarks by Fed officials in recent weeks solidified expectations for a rate hike before the year’s end.

The Fed’s next meeting is in November, but a rate hike ahead of the presidential election is seen as unlikely.

Orbex Forex Broker -Review and Forex cashback up to 85%

Traders Trust Broker – Review and Forex Rebates up to 85%