Daily Forex News by PipSafe – The US dollar closed bearish yesterday for the first time after a strong 10-day gain that saw prices rally from 98.00 to trade above 101. The bearish close in the dollar offered some respite for the single currency which has been in one of the worst losing streaks. In Japan, news of a 6.9 magnitude earthquake off the eastern coast on early Tuesday push the yen slightly higher although the impact was seen to be limited. The Nikkei index briefly fell on the news only to recoup the losses. On the economic front, today’s home sales data will be under the scanner. 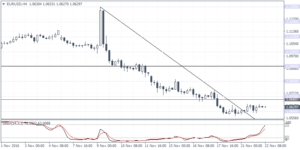 EURUSD (1.0629): EURUSD ended its 10-day losing streak yesterday after price closed bullish at 1.0626. Still, there is not much of evidence that the current bullish close will trigger the start of the correction as the risk of a bearish reversal remains.

On the 4-hour chart, the single currency managed to break  out from the falling trend line, but prices are seen flat within 1.0700 and 1.0600. Only a close above the resistance at 1.0700 will signal further upside as EURUSD could be seen targeting 1.0800 with the unfilled gap at 1.0855 likely to be the next target. 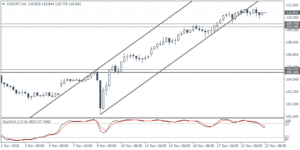 USDJPY (110.84): USDJPY closed with a spinning top pattern yesterday with a bearish close. The significance of this pattern is even more important as it comes after a strong wave of buying, which could indicate a near-term pullback if we see a daily close below yesterday’s low of 110.46. Short-term support is seen at 109.76 – 109.49 which could hold prices in the near term. Only a break below this support will confirm the declines towards 105.43 – 105.18. 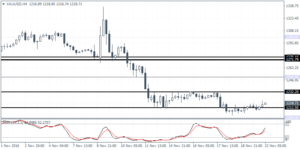 XAUUSD (1218.71): Gold prices closed with an inside bar yesterday which could signal an upside correction on a daily close above 1217.91. Short-term support could be seen coming in at 1212.50, and if gold prices hold above this support, the price could be seen targeting 1232.20 resistance level with further upside expected only on a close above this resistance level on the daily chart.

1250 remains the next key resistance level on further continuation. To the downside, failure to hold above 1212.50 could signal near term consolidation back at the lows with the potential to test 1200 psychological support in the near term.

Comment: the RSI is supported by a rising trend line.

The dollar took the anticipated breather yesterday, but the overall tone remains firm, especially against the swiss franc and also the yen, together with the single currency. Sterling continues to put up a decent fight, nudging back up against the 1.25 level on cable, whilst EURGBP is bouncing off support at the 0.85 area. Stocks are also putting up a decent run, the S&P hitting a new all-time high yesterday.

Naturally, European stocks are a little more circumspect in this environment, whilst the push higher on the Nikkei is mostly down the weaker tone seen on the yen. Trump has again re-iterated his intent to pull out of the Trans-Pacific Partnership trade deal when he takes office, which is one of the reasons why Asian emerging market currencies have been hit more than most in the post-election environment.

The reservations in Europe could well continue until the Italian constitutional referendum early in December (Sunday 4th), which is seen as the next major test of the European project. Some are billing this as having consequences for the future of the single currency itself, but we’ve had many of those moments before, so the euro could well be a little more circumspect about the more bearish scenarios.

Before then, we have the UK Autumn Statement tomorrow, which these days is more like a mini-budget. Most significantly, the latest forecasts for growth and borrowing will be released by the independent OBR, which will reflect the anticipated slower growth path as a result of the Brexit vote earlier this year. This could induce some sterling volatility. Before then, we have UK borrowing data today, with US existing home sales data later at 15:00 GMT.

Fxpro Forex Broker -Review and Forex Rebates Up to 85%