Gold prices fell by over 1.4% in yesterday’s trading session and down by over 8.4% on the month in November as prices fell to a fresh 9-month low. On the economic front, the U.S. dollar got a boost with a solid ADP payrolls print yesterday as it sets the stage for tomorrow’s nonfarm payrolls report. 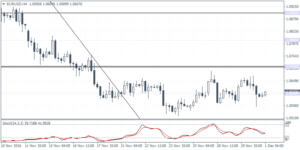 A breakout from either of these two levels is required to establish further trend continuation in the near term. The downside risks remain towards 1.0500, while above the resistance of 1.0700, prices could be seen rising to 1.0800.

Comment: the upward potential is likely to be limited by the resistance at 1.0635. 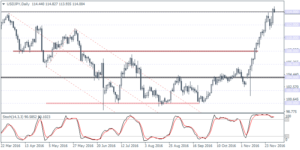 USDJPY (114.00): USDJPY’s gains towards 114.00 resistance were realized yesterday and from this resistance the scope for a decline to 108.00 increases even more. Following yesterday’s strong performance, which saw USDJPY rising over 1.85%, today’s daily close will be of importance as price trades near this key resistance level.

A reversal here could send the dollar lower in the near term, while a continuation could see USDJPY rise towards 118.00 which is the next main level of importance. 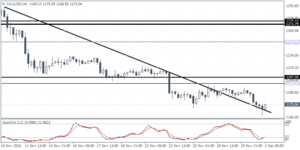 XAUUSD (1175.04): Gold prices fell sharply yesterday in today’s session testing the lows of 1162. On the 4-hour chart, we see prices being supported by the trend line which could signal the potential to the upside. 1200.00 now turns to a key resistance level, and a breakout above this level is essential to ascertain further gains. To the downside, the next psychological support at 1150 is not too far away and could pose a risk of a decline to this level.

Comment: the RSI is below its neutrality area at 50%