On Thursday, US Producer Prices unexpectedly fell to 1.9% in July (forecast was 2.2%), recording its biggest drop in nearly a year and suggesting further constraints in inflation that will likely delay a Federal Reserve interest rate increase. Additional poor data from the US was released by the US Department of Labor for Initial Jobless Claims for the week ending August 4th. Markets had expected a decline from the previous release of 241K but were surprised with an increase to 244K. A tightening labor market and languid inflation puts the FOMC in a difficult position with their plans to tighten economic policy. However, Federal Reserve Bank of New York President Dudley suggested on Thursday that the central bank was on track to raise interest rates once more, as he expects sluggish inflation to rise over the next several months.

With poor US economic data, and the rising tensions between the US & North Korea, the markets went into risk aversion “mode”, selling USD and buying safe havens. On Thursday, OPEC raised its outlook for oil demand in 2018 and cut its forecasts for output from rivals next year, although another increase in OPEC’s production suggested the market will stay in surplus regardless of the efforts to limit supply.

Japanese markets are closed for the Mountain Day public holiday on Friday so early trading conditions are reflecting less “risk-appetite” than normal.

EURUSD traded down to 1.17038 in early Thursday trading, before rebounding higher. EURUSD is currently trading around 1.1770.

USDJPY declined over 0.7% on Thursday, reaching a low of 109.205 as the markets bought JPY in typical “safe-haven” conditions. JPY buying continued overnight with USDJPY hitting a low of 108.90.3 – the lowest level seen in 2-months. USDJPY is currently trading around today’s lows at 108.98.

GBPUSD traded to a 3-week low, as an assortment of UK output and trade data did little to improve investor interest for an economy struggling to meet Bank of England targets. GBPUSD traded to a low of 1.29514, before retracing higher after UK Industrial Production data (MoM) came in at 0.5% in June, beating the forecast of 0.1%. Currently, GBPUSD is trading around 1.2990.

Gold climbed over 0.5% on Thursday, fueled by the tensions between the US and North Korea. Gold reached a high of $1,288.91 overnight – its highest level in 8 weeks. Currently, Gold is trading around $1,285.

WTI declined by nearly 2% on Thursday, as threats of further OPEC cuts are not counteracting the global glut, resulting in WTI hitting a low of $48.65. The trend continued overnight, with WTI losing another 0.9% – hitting a low of $48.20 in early trading. WTI is currently trading around $48.30.

At 13:30 BST, the US Department of Labor Statistics will release the much-anticipated Consumer Price Index Month-on-Month and Year-on-Year for July. Recent CPI releases have been tepid in regards to showing an economy that is growing with rising personal expenditure, and thus, directly influencing inflation. With an increase in CPI, the FOMC will have more maneuverability with regards to a potential rate hike before the end of the year. However, New York Fed President Dudley cautioned that it will “take some time” for inflation to reach the central bank’s 2% target, the latest official warning that price pressures remain muted. 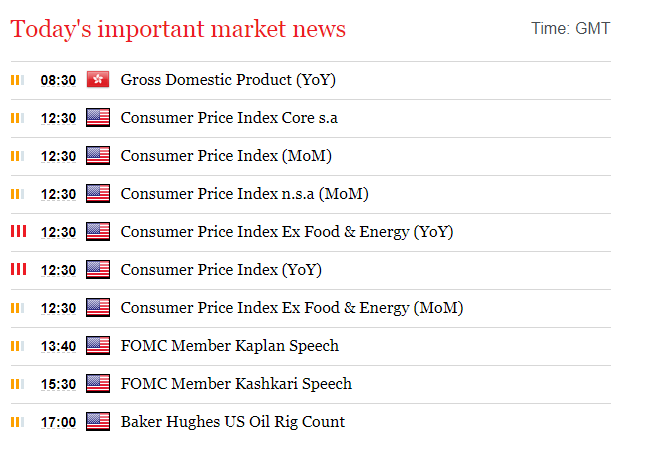