Dollar jumps on FBI comments – Following Friday’s initial reaction to the October payrolls, the markets gave back the gains as the risk aversion mode prevailed. The VIX, volatility index remained at a 4-month high by Friday’s close. Earlier today, the US dollar opened the week gapping higher after the FBI announced that there was no new evidence to warrant charges against Hillary Clinton. The dollar surged on the news, reversing off Friday’s closing prices at 96.92.

EURUSD (1.1071): EURUSD closed on Friday just a few pips off 1.1143 resistance level. Price gapped lower in today’s session in what could be the start of a correction to the rally since late October. Support at 1.1000 – 1.0975 will be the initial price level that could be challenged followed by 10922 – 1.0900. The Stochastics Oscillator on the daily chart points to the hidden bearish divergence, while on the 4-hour chart, the Stochastics has printed a bearish divergence confirming the declines to 1.09220. 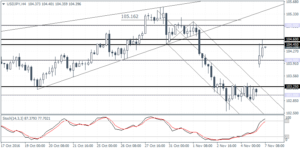 USDJPY (104.39): USDJPY gapped higher following Friday’s inside bar formation with price seen testing 104.60 – 104.45 resistance level. Failure to breakout above this resistance level could signal a retest back to 103.25 to fill the gap. On the 4-hour chart, the Stochastics shows a hidden bearish divergence, signaling a near-term decline.

Short term support is seen at 104.00, and only a breakdown below this support will trigger further selling which could send the dollar back towards 103.25 which is now a clear support level that has been formed. 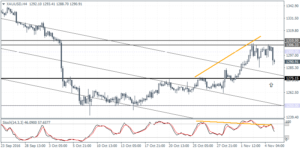 XAUUSD (1290.91): Gold prices are currently bearish following last week’s rally to 1300.00. The bearish divergence on the 4-hour chart continues to show that price could correct down to 1275.15 – 1275.00 support level. Gold prices could remain range bound within 1300 and 1275 price levels with a breakout from either of these levels signaling further near term continuation of the trend. Above 1300, look for gold to challenge 1315 – 1320 resistance level while to the downside, a breakout down below 1275 could send gold prices back towards 1250 support.

Comment: a support base at 1285.00 has formed and has allowed for a temporary stabilisation.