Syria dominated headlines overnight, as Nato members prepare for strikes against the country. There were reports of British Subs moving to the Eastern Mediterranean and Italian fighter jets seen in the same area. Commercial airlines have ceased flights in the region, particularly to Lebanon, which is on the route from the Med to Syria that sub-launched cruise missiles would fly over. There was also a report that UK PM May would seek cabinet approval to strike.

Trade tensions between the US and China increased, as the Chinese Ministry of Commerce said that they would fight back without hesitation if the US escalates tariffs. They hope that the US will understand the world situation and not blindly walk down its own path. It said that US actions so far were typical trade protectionism and unilateralism. It said that China will carry out measures announced by President Xi in regard to opening up the country to trade and investment.

UK Industrial Production (YoY) (Feb) was 2.2% v an expected 2.9%, against a previous 1.6%, which was revised down to 1.2%. Industrial Production (MoM) (Feb) was 0.1% v an expected 0.4%, against 1.3% previously. Seasonally, there is generally a downturn in this figure, with a drop early in the New Year, something which can be seen in the February reading, with a strong rebound expected in March. As was the case last month, the reading came in lower than expected.

ECB President Draghi spoke at the Generation Euro Students’ Award Ceremony, in Frankfurt. Some of the comments made were: more integration allows the EU to face the economy’s challenges. The EU can’t solve its problems just at national levels. Wages and inflation will rise as the economy improves and there is confidence that inflation will rise to the ECB’s goal. The direct impact of the US trade tariffs announcement has not been big, the key issue is retaliation. The confidence effect of the trade spat can be very important.

Inflation is currently one of the main drivers of market sentiment in the US. The higher reading shocked the market in January but can be partly explained as an increase in demand for winter items due to the cold weather. This can be seen in the February number, which showed a correction which continued with the present release. Despite the fall in monthly data, the yearly data increased from last month. USDJPY found support at 106.677 and advanced higher from there to 106.956 due to this data. The FOMC Minutes were released along with the US Monthly Budget Statement (Mar) which showed a balance of $-209B v an expected $-194B, against $-215B previously. The FOMC Minutes revealed that all the members expected 12-month inflation to rise in the next few months. Almost all agreed that gradual rate hikes were appropriate and the economic outlook had strengthened in recent months. A strong majority agreed that the prospect of retaliatory trade actions by other countries is a downside risk for the US economy.

Despite expectations for rising YoY inflation, policymakers agreed that this alone would not justify a change in projected rate hike path. Many said the Fed funds rate will likely need to be above the normal long-term rate for a time. A few said future Fed statements might need to signal that policy will shift to being a neutral or restraining factor for the economy. The Fed sees a ‘significant’ fiscal policy growth boost over the next few years. Participants noted slow recent household spending and investment but expect it to be transitory, pointing to factors including delayed payment of personal tax refunds and residual seasonality in data. No one saw balance of risks to the downside for inflation. 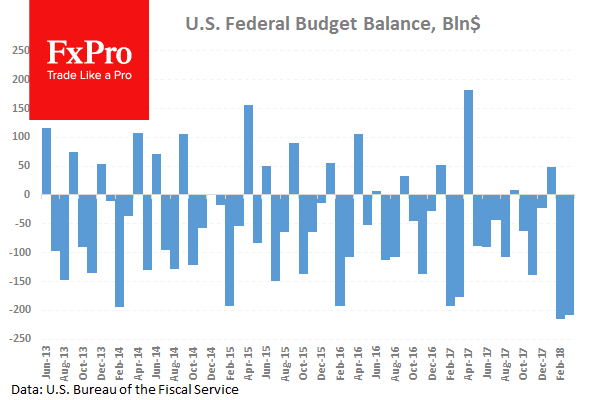 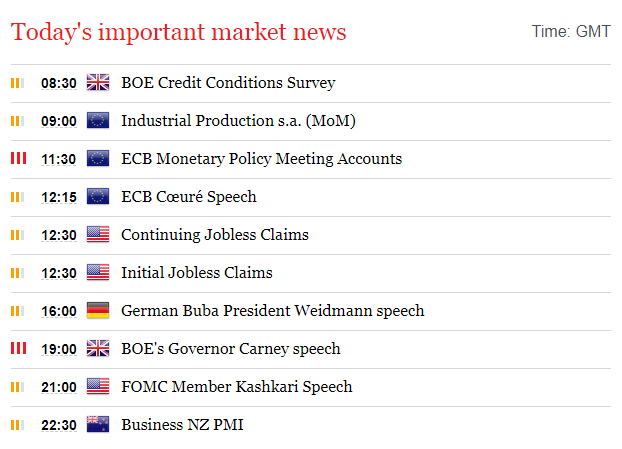