European Central Bank – This week we’ll get more insight into the thinking of central banks as the Reserve Bank of Australia (RBA), the Fed and the European Central Bank (ECB) release the minutes of their recent meetings. We’ve seen these reports move the market before – last week for example the yen weakened after the Bank of Japan released the minutes of its latest meeting. 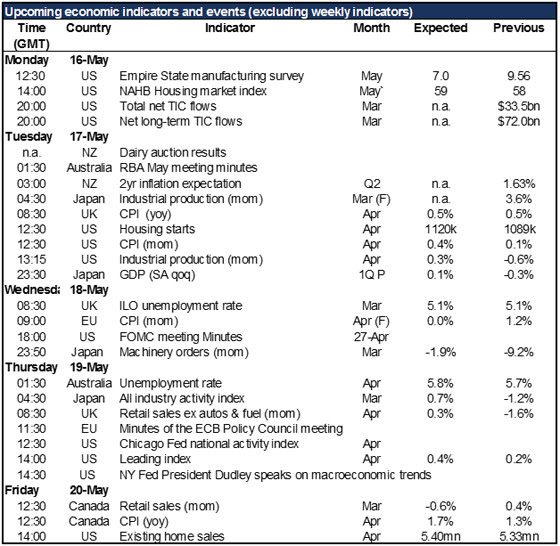 The RBA cut its rate by 25 bps at the meeting in question yet adopted a neutral stance afterwards, causing the AUD to gain on the news. Investors will be reading the minutes closely to see just how concerned the Board is about the weak inflation. Given that the meeting was followed by a Statement on Monetary Policy, there may not be that much additional information, but you never know what may be hidden in it. The market is pricing in one more cut by the end of the year (largely by October), but could bring that forecast forward if the minutes contain signs of serious concern.

The Fed and the ECB of course didn’t take any actions at the meetings in question. In the case of the Fed, there wasn’t a press conference afterwards either. We’ve been hearing fairly hawkish comments from FOMC members ever since the meeting, such as Boston Fed President Rosengren’s comments last week that the market is “too pessimistic” and “the Fed should be ready to gradually normalize interest rates.” The minutes may clear up some of this confusion. In addition, we’ll hear from three Fed speakers on Tuesday (Williams, Lockhart & Kaplan) and the influential NY Fed President Dudley on Thursday.

As for the data, the focus will be on the UK as they release CPI, employment and retail sales. The news seems likely to be negative for the pound. The recent acceleration in inflation is expected to stop, job growth is expected to have slowed the yoy rate of growth in retail sales is forecast to have fallen. Of course the Bank of England has emphasized that it’s not putting too much weight on the data ahead of the Brexit referendum on June. Still, the news is likely just to reinforce the picture of a sluggish UK economy that we’ve gotten from many other indicators, such as the disappointing PMIs and falling industrial production. GBP-negative 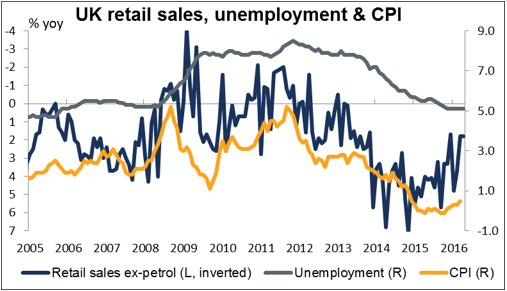 There’s a lot of data coming out from the US, too. Two Fed surveys — Empire State manufacturing survey for May and Chicago Fed national activity survey for April – will complement the industrial production data for April. The forecasts suggest that none of them should be particularly exciting. On the contrary, the main question is probably whether the data will be even worse than expected. The Citi US economic surprise index is once again heading lower. It hasn’t been significantly above zero (indicating that the data are coming out better than expected) since January 2015. The data are potentially negative for USD. 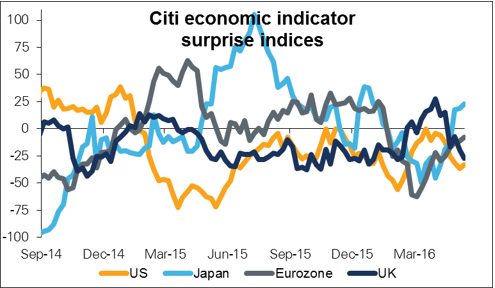 Several bits of data on the US housing market are coming out, such as the NAHB housing market index, housing starts & permits, and existing home sales. In contrast to the industrial data, these housing figures are forecast to be relatively strong, indicating that the small rise in rates last December didn’t derail this interest-rate sensitive sector. That could prove USD-positive.