The EUR/USD pair initially fell during the day on Friday, but bounced in order to form a hammer. This happened on Thursday as well, and right at the 1.1050 level where we would anticipate seeing quite a bit of support. With that being the case, the market looks as if it is ready to continue going higher now. If we can break above the top of both hammers, the market should then try to reach towards the 1.13 level, perhaps even higher than that. Ultimately, you have to look at this area as the scene of a significant breakout recently, and it now looks like it has been retested for supportUltimately, you have to also pay attention to the fact that both central banks in this particular market are looking to devalue the currency, so with that being the case it is a bit of a fight between central bankers.

Ultimately though, the Americans are much better than the Europeans at devaluing their currency, so more than likely the EUR/USD pair will continue to go higher.If we did break down below the 1.10 level, at that point in time we could very well drop down to the 1.08 handle. Ultimately, this is a market that has a lot of support just below, so it makes more sense that we go higher. Also, we are now starting to come to grips with the fact that the Federal Reserve cannot raise interest rates anywhere near as soon as people had anticipated, so that of course works against the value US dollar overall.At this point in time, the 1.13 level would be targeted, and then eventually the 1.15 level after that. This is a market that should continue to have more than enough bullish pressure underneath it, and on top of that there are actual signs of the US economy starting to stagnate a little bit. Ultimately, we are buyers on a break out to the upside or sellers below the 1.10 handle below, but admit freely that going long is going to be the easier to trade. 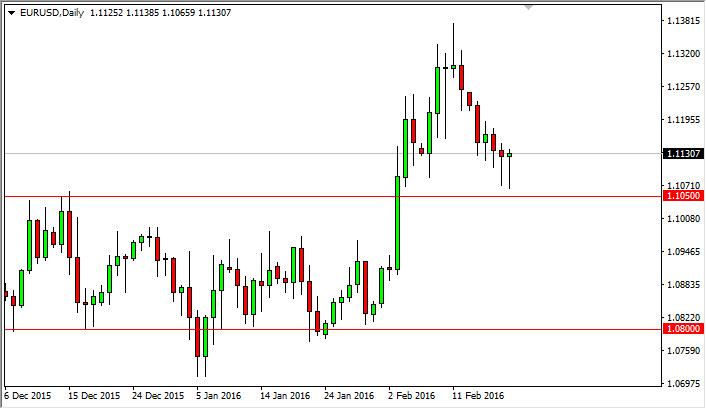 EURUSD needs to hold below 1.1110 level being the intraday Pivot Point if the price action is to continue the downward move.The initial downside target is 1.1037,