EURUSD Breaks 1.20 For the First Time Since December 2014

EURUSD broke 1.20 for the first time since December 2014 on Tuesday, as further tensions between the US and North Korea brought in USD Bears, and ECB President Draghi’s recent lack of information on the ECB’s monetary policy brought in EUR Bulls.

The latest North Korea missile firing had Japan stating that such action posed an “unprecedented, grave and serious threat”. Japan has requested that the United Nations Security Council hold an emergency meeting. Tensions between North Korea and the US will become even more “strained with President Trump stating that the U.S. will consider “all options” in its response. North Korean leader Kim Jong Un said the test-firing of a missile over Japan on Tuesday was a “meaningful prelude” to containing the American territory of Guam, adding he will “continue to watch the response of the US before deciding on further action”.

The US Conference Board released Consumer Confidence on Tuesday. The release beat market estimates and improved upon the last reading of 120.0 by coming in at 122.9. The release was the strongest level seen in 5 months, as consumers are more confident about the improving labor market. With US house prices rising in June, it suggests a recent improvement in consumer spending is likely to be sustained. Overnight the markets have seen some risk-on sentiment returning with USD making gains across the board.

USDJPY, favored as a safe-haven, declined over 0.7% on Tuesday hitting a low of 108.264. USD bulls returned overnight, pushing USDJPY higher with the pair currently trading around 110.00.

Gold continued to strengthen, benefitting from its safe-haven status. Gold traded to a yearly high of $1,325.96 on the day before retracing overnight to currently trade around $1,309.

WTI continued its decline on Tuesday, impacted by Tropical Storm Harvey’s devastation on the US refining industry, to trade nearly 2% lower at $45.98pb. More than 16% of refining capacity in the US has shut down due to the storms devastation. Currently, WTI is trading around $46.56pb.

The major economic releases for Wednesday will come out of the US:

At 13:15 BST, US ADP Employment Change for August will be released. Consensus calls for an improvement to 185K from the previous 178K. The ADP report will be a crucial data point ahead of Friday’s NFP. Whilst there is limited correlation between ADP and NFP, the markets will be looking for wage growth information ahead of Friday’s Average Earnings release.

At 14:30 BST, the US Bureau of Economic Analysis will release Gross Domestic Product Annualized for Q2. The markets are expecting the release to come in at 2.7%. Forecasts call for a slight increase, from the previous reading of 2.6%, as a strong US labor market is expected to fuel personal consumption, the largest contributor to US economic growth. If GDP comes in stronger than 2.7% markets will expect to see some USD buying, yet, with current geopolitical tensions and a lack in confidence in the current Administration, this is likely to be short lived. 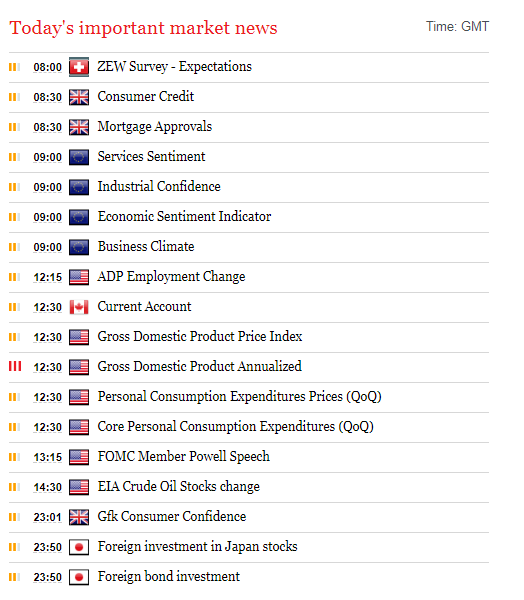