EUR/USD Intraday – The EUR/USD pair went back and forth during the course of the session on Monday, testing the 1.12 level for resistance. This being the case, it’s likely that we will find sellers, but at this point in time it doesn’t look like we are willing to make any real serious move at this point in time. I want to see some type of exhaustion near that I can sell, because quite frankly I think the turnaround has been a bit overdone. It’s not until we break above the top of the uptrend line that we previously broke down through that I would consider buying. 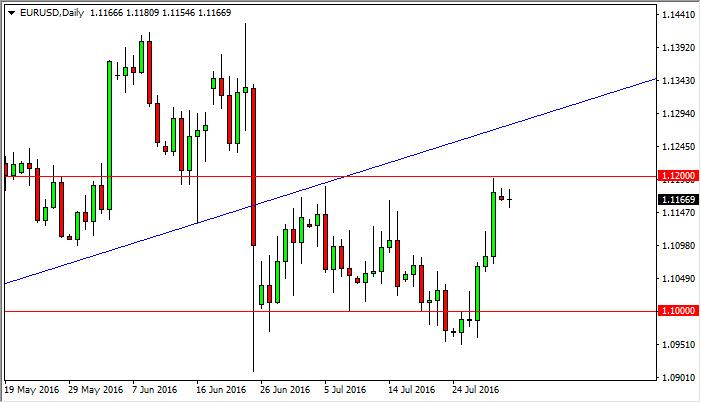 The euro and the pound were also higher against the US currency on Tuesday as the dollar continued to come under pressure from disappointing US economic data. Weaker-than-expected ISM manufacturing data yesterday lowered the odds that the Fed would raise rates in 2016. The euro broke above 1.12 dollars in late Asian session to a 5-week high, while the pound recovered from yesterday’s slide to climb to 1.3230 dollars. Sterling’s gains are likely to be limited though as markets are fully pricing a rate cut by the Bank of England on Thursday.

The dollar was also pressured against the yen and breached the key 102 level in late Asian session to drop to a new 3-week low of 101.62 yen. The yen was boosted after Japan’s cabinet approved the government’s fiscal stimulus package designed to lift growth and inflation in the country.

The weaker dollar failed to lift oil prices however as WTI and Brent crude were both stuck at 3-month lows. WTI futures were struggling to hold above $40 a barrel in late Asian trading today. Ongoing concerns about the global supply glut have been weighing on the commodity in recent days.

Looking ahead to the rest of the day, the first post-Brexit construction PMI out of the UK will be closely eyed following yesterday’s disappointing manufacturing PMI, while in the US, personal income and spending data will come in focus.