EUR/USD Prediction – The EUR/USD moved higher slicing through resistance near the 20-day moving average surging following the weaker than expected U.S. payroll report. Yields in the U.S. also tumbled making the dollar less attractive as short quickly covered their currency positions. Support is seen near former resistance at 1.1244, while resistance is now seen near the May highs at 1.1616. Momentum has turned positive with the MACD (moving average convergence divergence) index generating a buy signal. This occurs as the spread (the 12-day moving average minus the 26-day moving average) crosses above the 9-day moving average of the spread.U.S. nonfarm payrolls increased 38k in May following a 123k increase in April which was revised down from 160k and a 186k jump in March which was revised from 208k, for a net -59k revision. Expectations were for a rise of 155K. The unemployment rate fell to 4.7% from 5.0%. The labor force plunged 458k after April’s 362k drop, while household employment bounced 26k from -316k. 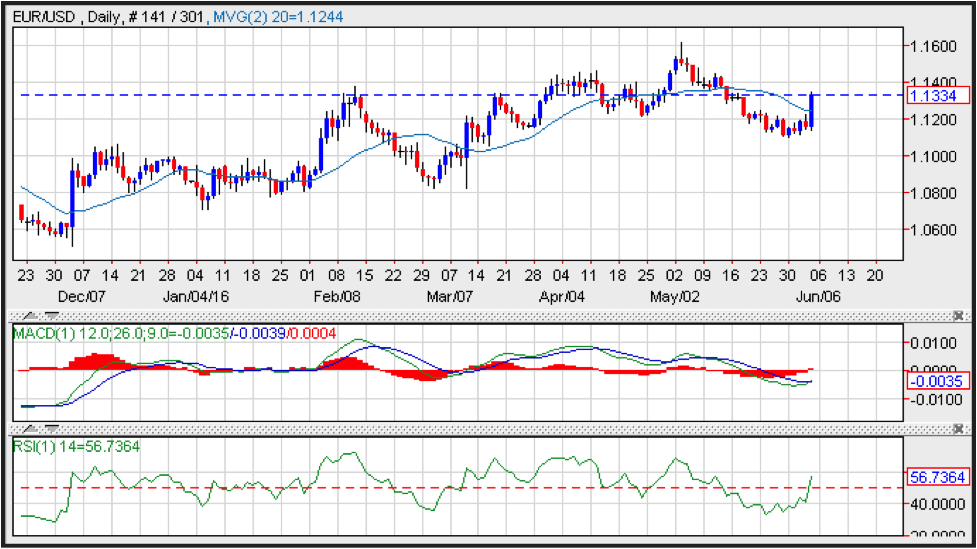 Comment: technically the RSI is above its neutrality area at 50.