Fed is Delphic, RBNZ is dovish: what will BoJ do?

Fed is Delphic, RBNZ is dovish: what will BoJ do?

Two down and one more to go. The Fed and the Reserve Bank of New Zealand (RBNZ) met overnight while the Bank of Japan (BoJ) started its two-day meeting. No change in policy but more indications that the central banks of the world are worried about the current situation. Whether that translates into action by the BoJ tonight is another matter, however.

The changes were that a) they removed the sentence that said the FOMC was “reasonably confident” that inflation will rise back to its target. Does that mean they are now not confident it will rise back to target? No answer. B) they said they are “closely monitoring” global economic and financial developments (aka Chinese stocks and the yuan). “Closely monitoring” seems to be a trigger phrase for the Fed, much like the ECB often says it is “vigilant” the month before it takes some policy action. It means they’re worried about something and if it gets worse, they will respond. They also c) removed the sentence about the risks to economic activity and the labor market being balanced, but here too they didn’t replace it with any explanation of how they do see the risks. So at the end of the day we are more confused than ever about their intentions, which could indicate that they aren’t sure what’s going on, either

Net net, the statement acknowledged the turmoil in the markets and the slowdown in growth recently, but didn’t say anything to indicate that they wouldn’t hike rates in March. Everything depends on the data, one assumes. We will have to wait for Chair Yellen’s testimony to Congress on Feb. 10th for more clarity, but I doubt if we will get any clarity then either, because it doesn’t seem like they have any clarity to give. This is only realistic, because in fact the economic signs are quite mixed at the moment.

Is this ambiguity good or bad for the dollar? I believe that as long as they don’t rule out further rate hikes or change their forecasts, it should be dollar-positive in that the Fed remains more hawkish than the market.We’ll have to see how the dots fall in March, however.

Now onto the BoJ

In short, every central bank that’s met recently – Bank of Canada, ECB, Fed and RBNZ – has expressed concern about the global environment and at least been less optimistic (Fed) if not more pessimistic (BoC, ECB, RBNZ). So where does that leave the Bank of Japan and Friday’s decision?

With its close ties to China, Japan has to be worried too. Inflation has yet to recover and with oil prices falling further, isn’t likely to any time soon. Moreover, the yen has been appreciating recently, which won’t help the country’s flagging exports. Finally, as I said on Monday, the BoJ may want to influence the round of wage negotiations that’s just beginning by pushing up inflation expectations again.

Nonetheless, most economists surveyed don’t expect them to take any additional action at this meeting, and I would tend to agree. I think BoJ Gov. Kuroda’s recent comments have been too confident. Of course, we saw with the Swiss National Bank a year ago that central bankers’ strongly held views are subject to change without notice. Nonetheless, I think that they will want to see what effect if any the adjustments they made to their program last month are having before they move again. Moving two months in a row would indicate more concern than officials have been publicly expressing.

I expect that the most likely result will be for the BoJ to follow the pack:  to tweak their statement to be somewhat more dovish in preparation for a further expansion of their QQE program in April, when they revise their economic forecasts.

I expect that even such a small concession as that would cause the yen to weaken slightly. The reason is that I think the market is not positioned for any further easing.  The Commitment of Traders report shows that speculators on the IMM switched to being long JPY from the beginning of this year for the first time since a few months before PM Abe was elected PM in December 2012. Moreover, they have added to these positions each week. This indicates that FX investors have largely given up on the idea of further stimulus.  Also, the Tokyo stock market is telling a similar story:  financial and property stocks have underperformed, whereas they would usually benefit if investors expected further easing. 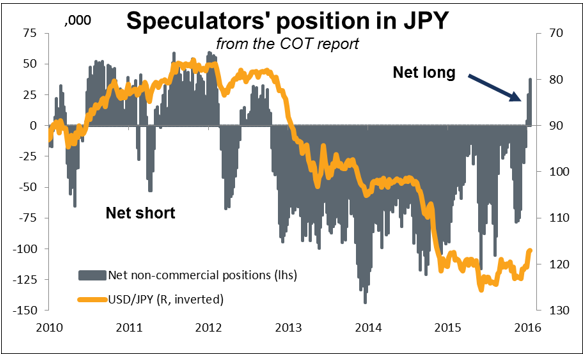