Federal Open Market Committee (FOMC Meeting) – The November FOMC meeting concluded yesterday with the Fed releasing its rate statement. While keeping interest rates unchanged as widely expected, the Fed noted that the case for a rate hike had strengthened, indicating that December meeting could be ripe for another rate hike. Still, the US dollar was muted to the news, only pulling back from the day’s lows of 97.17 to close the day at 97.40. With the dollar index now trading at support, a temporary exhaustion to the trend cannot be ruled out. 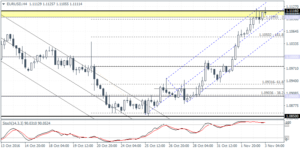 EURUSD (1.1111): EURUSD extended this week’s gains towards $1.1100 yesterday marking a two day winning streak after a minor pullback on Monday. The daily chart shows the Stochastics already posting a higher high against the lower high in price indicating a hidden bearish divergence near the resistance level of 1.1143 – 1.1100.

A near-term pullback is, therefore, likely unless the euro manages to breach above 1.1143. On the 4-hour chart, price action is seen consolidating near the mentioned resistance level and could be seen trading flat for the moment. The downside can be expected on a dip below 1.1050, which could see the euro correct lower towards 1.1000 support. 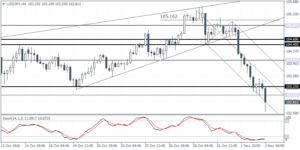 USDJPY (102.81): USDJPY is seen breaking out from the rising median line on the daily chart and could see price testing 102.00 support in the near term. On the 4-hour chart, the Stochastics oscillator remains in oversold territory and could signal a near-term pullback.

Comment: The pair is trading within a bearish channel. 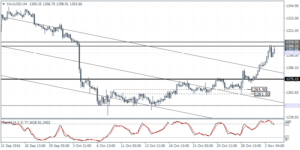 XAUUSD (1303.66): Gold prices gained on the back of yesterday’s FOMC meeting and the pre-election jitters which is keeping risk appetite at bay. Spot gold regained the psychological $1300 level yesterday and is now seen trading in the 1300 – 1315 resistance zone. Further upside can be expected only on a daily close above 1315 with bullish signals. In the near term, gold prices could be seen posting a correction with support identified near 1275.00.