All Focus on US Inflation Data as USD Weakens

All Focus on US Inflation Data as USD Weakens – The USD has weakened further overnight as the market awaits important US Data at 13:30 GMT. USDJPY broke down under 107.000, while GBPUSD made another attempt to stay above 1.39000. EURUSD advanced to 1.23900, while Gold followed suit to reach a high at 1336.80. The US CPI data later is expected to point to an Inflation figure that maintains the path of rate increases being travelled by the US Fed.

Any surprise in the number can spark an increase in volatility comparable to the last week and a half of trading. If the number is a dud, the market can become indecisive and may attempt to test support and resistance before a direction is found. Any trend currently being traded may be altered by the market reaction to the data release.

Bank of Japan Governor Kuroda spoke in parliament saying: Cryptocurrencies are mostly used for speculative investing and should be called crypto assets. Cryptocurrencies like bitcoin are not seen as currencies. Japanese economic fundamentals, company profits are strong. The risk-off sentiment in the US led to stock falls and the BOJ will continue to closely monitor developments in markets because financial market moves can have an impact on the real economy. Japan’s economy needs the BOJ to continue current policy. The Bank of Japan is still a long way from price target. Japan’s economy needs persistent monetary easing.

At 13:00 GMT, US FOMC Member Mester spoke about the economic outlook and monetary policy at the Dayton Area Chamber of Commerce Government Affairs Breakfast. Audience questions followed and some of the comments made were: Inflation to gradually rise to 2% over next 1-2 years and further rate hikes needed this year and next.

US economic fundamentals are very strong and Mester sees economy working through latest turmoil. Latest market moves haven’t curbed risk-taking or spending, and trading has been relatively orderly. Tax cuts adding to growth and could be upside risk. GBPUSD sold off from 1.38969 to 1.38519 after the comments.

At 08:00 GMT, German Bundesbank President Weidmann is due to deliver opening remarks at the Bundesbank Cash Symposium, in Frankfurt. EUR pairs may be moved by his comments.

At 08:50 GMT, SNB Governing Board Member Zurbrugg will deliver a speech titled “Cash – a means of payment yesterday, today, and tomorrow” at the Bundesbank Cash Symposium in Frankfurt. His comments could move CHF crosses.

At 11:20 GMT, SNB Governing Board Member Zurbrugg will take part in a panel discussion at the Bundesbank Cash Symposium in Frankfurt. His comments can move CHF crosses.

At 12:45 GMT, ECB’s Mersch will speak and this may impact EUR crosses. 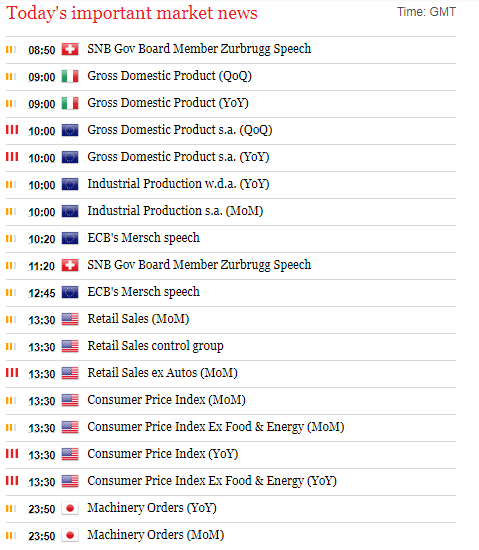