Source: FXPRIMUS Forex Broker(Review and Forex Rebates Up to 85%)

Having made fun last week of the market’s forecasts for FX rates in 2015, I will now proceed to tell you what the market is forecasting for 2016. You may wonder why this should be of interest to you, since the market’s forecast last year was no better than a coin toss. The reason is that while the median forecast may not have a lot going for it, the extremes do have a story to tell. One of those stories may well be right – in which case, you should know what it is. And you most certainly should know what the other story is too so that you can check to make sure you haven’t missed any important points. 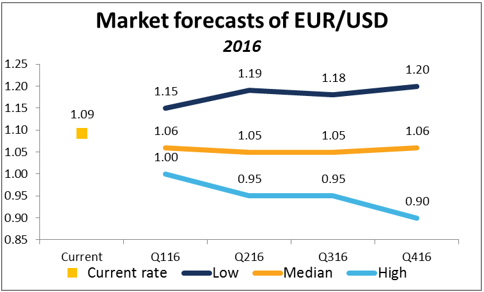 This graph shows the Bloomberg forecasts for EUR/USD. “Low” and “high” refer to the dollar, not the euro. I use this terminology consistently.

As you can see, the median forecast is for very little change, but there are some analysts who expect a larger move -more to the downside than to the upside. The following histogram shows the distribution of forecasts: 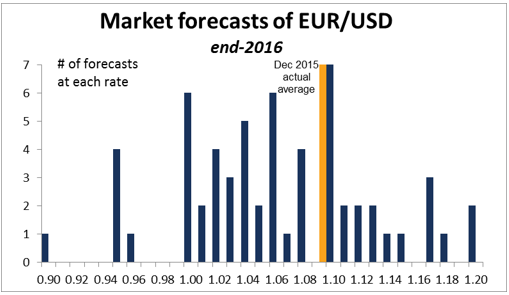 EURUSD needs to hold above 1.0880 level being the intraday Pivot Point if the price action is to continue the upward move.The initial upside target is 1.0954