Forex Analysis – Global markets bounced back on Thursday as the end of the quarter flows and the reality of a prolonged Brexit process added much needed stability. Bank of England (BoE) Governor Mark Carney brought further pressure down on the pound as he said it is likely the central bank will cut the interest rate in the summer. The U.K. benchmark interest rate is at a record low of 0.50 percent. Political stability in Britain is another victim of the collateral damaged caused by Brexit. Former London mayor and leading Brexit campaigner Boris Johnson has taken himself out of the running after failing to keep the support of his campaign manager Michael Cove now himself in the running for Prime Minister.

The Reserve Bank of Australia (RBA) will announce its rate statement on Tuesday, July 5 at 12:30 am EDT. The RBA has cut once this year to a record low of 1.75 percent. The Brexit fallout will intensive the negative effects of the China slowdown and weaker employment numbers which could see the central bank ease sooner rather than later to respond to macro headwinds.

The July 4 Holiday in the United States will compress next week which will be a busy one. The market’s focus will be centered on the U.S. non farm payrolls (NFP) to be released Friday, July 8 at 8:30 am EDT. Other events to keep track of next week include: BoE Carney’s speech on Tuesday, July 5 at 5:30 am EDT, the minutes from the Federal Open Market Committee (FOMC) meeting in June on Wednesday, July 6 at 2:00 pm EDT, ADP Employment data and Crude Oil inventories on Thursday, July 7. 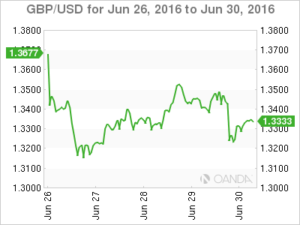 The GBP/USD lost 10.63 percent in the last week. The shocking decision by British voters to support the Leave campaign on the UK EU referendum left the pound trading at 1.3228. The comments from BoE Governor Mark Carney on a likely interest rate cut in summer has put downward pressure on the currency. The aftershocks to the U.K. economy are validating the tone of his warnings ahead of the vote. He was heavily criticized by Brexit supporters for his seemingly biased comments, but as the votes were counted Carney’s forecast is becoming a reality. Central bank intervention will be needed and all those months of preparations will be put to good use. Political instability in the U.K. has brought the GBP down from a 5 day high of 1.5019 to a low of 1.3120. 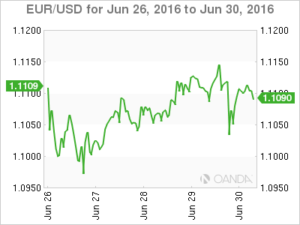 The EUR/USD lost 2.52 percent during the week. The pair is trading at 1.1065 after risk aversion trigged by the Brexit vote put downward pressure on the EUR as investors looked for the safety of the USD. As markets recovered once the scope of the Brexit process hit the markets depreciating the USD against the EUR, but the uncertainty of the European project and soft economic data is not supporting the single currency. 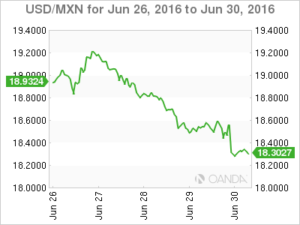 The USD/MXN lost 0.66 percent in the last week after the Mexican central bank surprised markets with a larger than expected rate cut on Thursday. The Banxico raised rates by 50 basis points to 4.25 percent and boosted the emerging market currency back to 18.13 after having reached the historic low of 19.51 versus the USD at the height of Brexit anxiety on Friday. The Mexican central bank said in the rate statement that the large deterioration by external conditions could adversely affect inflation. The MXN is the most liquid emerging market currency and acts as a proxy for EM exposure, this sometimes results in the peso depreciating way beyond Mexico’s strong fundamentals compared to the rest of the region.

After all the uncertainty surrounding the Brexit outcome economic data will make a return next week with the U.S. NFP being the biggest indicator. The true impact of Brexit is still unknown and will continue to bring weakness to the pound and U.K. stock markets but as markets returned to relative stability investors are looking to the U.S. economy for signs of growth specially after last month’s disappointing 38,000 job gain. U.S. unemployment claims point to a healthy labor market but May’s weak numbers are a reminder that the jobs recovery has limited upside before it reaches a natural cap.