Forex Analysis (Yen,AUD,BOJ and RBA decisions) – The Bank of Japan left its monetary policy unchanged, keeping interest rates at -0.10% as widely expected, although the central bank revised its inflation forecasts. The yen was muted in its reaction to the news. Meanwhile, the RBA was also seen holding rates steady which was also expected. The central bank linked future policy outlook to being data dependent while remaining hopeful that inflation has bottomed. With the start of a new trading month, the economic calendar is busy today. 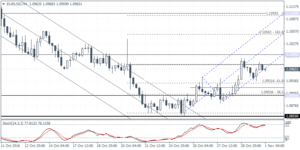 The bullish bias is retained as long as the support zone of 1.0931 – 1.0903 holds out. In the case of a breakdown of prices below this support, further declines could be seen with EURUSD likely to test 1.0850. 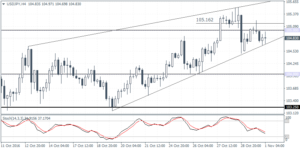 USDJPY (104.83): The US dollar closed bullish yesterday, but price action is starting to be biased to the downside. The 4-hour chart shows the doji candlestick patterns formed near the resistance level of 105.16 – 105.00 followed by a bearish close lower. A breakdown from the triangle pattern could, therefore, signify further weakness in the dollar which could send prices testing 104.00yen. Overall, the upside momentum is starting to look weaker but needs confirmation from the breakout from the lower trend line of the triangle pattern. 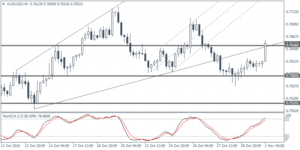 AUDUSD (0.7652): The Australian dollar rallied to the previous resistance level of 0.7648 earlier today on the RBA’s decision to hold rates steady. The rally off the lower support near 0.7580 shows a retest off not just the resistance level but also the breakout from the rising median line.

This could signal a near term decline to the downside if price fails to break out above 0.7648 on a daily session. In the near term, AUDUSD could remain range bound within 0.7648 resistance and 0.7580 support with a breakout from either of these levels providing room for further gains or declines.