Markets were, for the most part, little changed on Wednesday as traders waited for today’s Bank of Japan and ECB rate decisions. Earlier today the Bank of Japan maintained its heavy monetary stimulus and gave signs that it is in no hurry to rein in stimulus, unlike many of its Central Bank counterparts. The US Energy Information Administration report on Wednesday showed a draw of -4.7 million barrels in US commercial inventories. Along with the Baker Hughes report, showing no new Oil Rigs had been added since the last report, both reports gave some respite to the recent edgy Oil market. The upward move may be short-lived as Ecuador announced its plans to abandon OPEC’s production cut deal and boost production to boost its finances. The timing of Ecuador’s decision will further concern the markets as they wait for the next meeting of OPEC and Russian energy ministers next week that many believe will result in an announcement of deeper production cuts. The markets are now waiting for the ECB meeting later today and any hints from President Draghi that the ECB maybe less inclined to increase the size, or duration, of its asset-purchase program.

EURUSD retreated from its highest close since August 2015 as the market looked toward the ECB’s plans for stimulus measures and the possibility of a change of tone when the decision is announced later today. Currently EURUSD is trading around 1.1512

JPY weakened slightly after the BOJ pushed back its projected timing for hitting its 2% inflation target, as it cut price forecasts until fiscal year 2020. Currently USDJPY is trading around 112.12

GBPUSD was virtually unchanged from its opening price to last nights close as many are awaiting the release of UK Retail Sales today to gauge if the Bank of England’s monetary policy is working, or if a rise in interest rates is required. Currently GBPUSD is trading around 1.3022

AUD remains strong against USD gaining nearly 0.4% yesterday and adding to recent highs reaching 0.7955 on the Wednesday – a level not seen since March 2015. Currently AUDUSD is trading around 0.7942

Oil reacted with yesterday’s release of US Oil inventories that showed a larger than expected drawdown of -4.727 million compared to the expected -3.214 million. Following the release WTI traded up 1.6% to reach a high on Wednesday of $47.36pb. Currently WTI is trading at $47.32pb

Gold remains buoyed by USD weakness but traded in a narrow range on Wednesday. Gold is currently trading around $1,239
At 9:45 BST UK Retail Sales (MoM) (Jun) will be released with many expecting a better performance of 0.4% compared to the previous poor -1.2%. Consumer spending in the UK is expected higher during the summer months and will clearly impact inflation which, in turn, will impact the likelihood, and timing, of future interest rates hikes.

At 12:45 BST the ECB Interest Rate decision will be announced followed at 13:30 BST with the ECB Monetary policy statement and press conference. Markets are not expecting any change in ECB monetary policy but any “comments” will likely be interpreted as “hawkish” or “dovish” for future changes in Eurozone interest rates.

At 13:30 BST the US Department of Labour will release Initial Jobless Claims (Jul 14). The consensus is for an improvement to 245K from the previous reading of 247K. Markets will be looking to see if the US Labour market is continuing to strengthen. Any dramatic change in this number will impact USD. 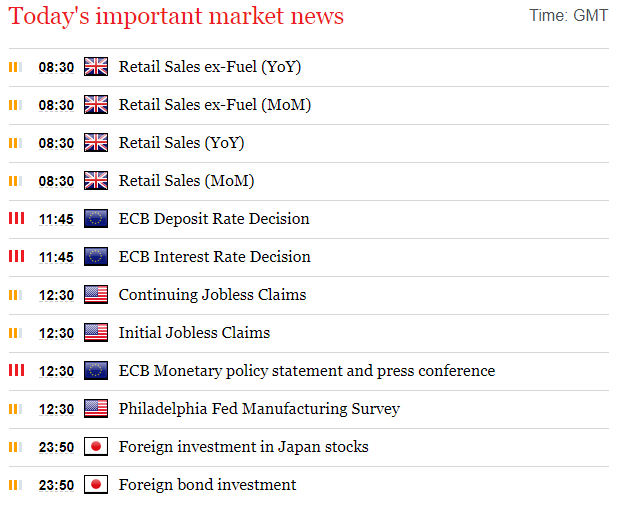