Forex Daily Technical Analysis – The US dollar was seen trading above 101.00 in early Asian trading today spurred by positive comments on the economy by Fed Chair Janet Yellen. Testifying to the Joint Economic Committee at Washington yesterday, Yellen signaled that rate hikes were coming soon. US stocks closed higher after her comments while the dollar is set to close the second week with strong gains.

Positive US economic data also helped to fuel the dollar’s rally as October’s inflation figures rose 1.6% on the year marking the fastest increase in inflation, while housing starts jumped 25.5% on the year to a seasonally adjusted rate of 1.32 million units. The initial jobless claims fell 19k to 235k for the week ending November 12, marking the lowest in 40-years. 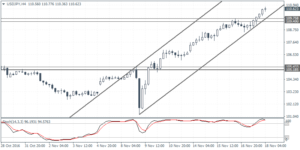 USDJPY (101.62): USDJPY rose 0.98% yesterday as the dollar comfortably broke above the 110Yen handle. The bullish continuation following the doji candlestick pattern formed just two days ago signals further continuation to the upside unless we see a bearish close today. Minor support can be seen forming near 109.75 – 109.49 region which could keep the bullish momentum going, while a break below this level could signal an impending correction down to 105.43 – 105.18 support. 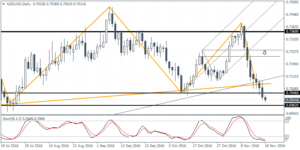 NZDUSD (0.7011): NZDUSD continues to extend its declines with prices seen entering the support level of 0.7046 – 0.6982. Continued declines could see the Kiwi closing bearish for a second week following the bearish engulfing pattern previously. The downside target for NZDUSD remains at 0.6800 initially followed by a decline to 0.6659. In the near term, kiwi could be seen consolidating at the current support levels, but the upside could be limited to 0.7050. 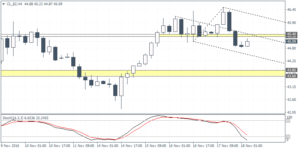 CLZ6 (45.09): Crude oil prices closed bearish for the second day after rising to a four-day high of $43.55 earlier this week. The failure to clear above this daily close saw oil futures posting moderate declines. Technical resistance is seen at the $45.40 – $45.30 region which could be tested in the near term. Failure to clear this resistance could see oil futures slip towards the lower support at $43.85 – $43.60 levels.