With the markets risk appetite dampened after North Korea’s most powerful nuclear test to date, USD and Global equities fell whilst Gold, Yen and Sovereign Bonds all rose. President Trump is supposedly weighing economic sanctions that could target China as a result of Pyongyang’s recent nuclear test on Sunday. Asia Business Daily reported on Tuesday that there is a high chance North Korea will fire an ICBM missile before the Sept. 9 foundation day after the Pyongyang regime started moving such a weapon. The US is calling for further sanctions against the regime whilst the US Ambassador to the UN says Pyongyang is ‘begging for war’. The markets expect more rhetoric to follow.

With the US Labor Day Holiday markets were somewhat lethargic, as expectations grew for hints of economic growth following a plethora of Central Bankers speaking this week. The ECB is scheduled to meet on Thursday, but the markets are not expecting the ECB to tighten economic policy any time soon. They are, however, expecting to hear ECB President Draghi raise concerns over EUR recent strengthening. Several FOMC members are speaking today and, again, the markets will be listening acutely to determine when the US may hike rates.

USDJPY has gained based on risk aversion due to Japan being the world’s largest creditor nation. Currently, USDJPY is trading around 109.30.

WTI has gained slightly overnight to currently trade around $47.75pb.

Central Bankers are scheduled to speak:

At 10:10 BST, Phillip Lowe, Governor of the Reserve Bank of Australia is scheduled to speak.

At 13:00 BST, FOMC Member Brainard is scheduled to speak.

At 15:00, the US Census Bureau will release Factory Orders (MoM) for July. The previous strong reading of 3% is not expected to be met with the consensus for this release expected around -3.2%.

At 18:10 BST, FOMC Member Kashkari is scheduled to speak.

At 23:05 BST, FOMC Member Kaplan is scheduled to speak. 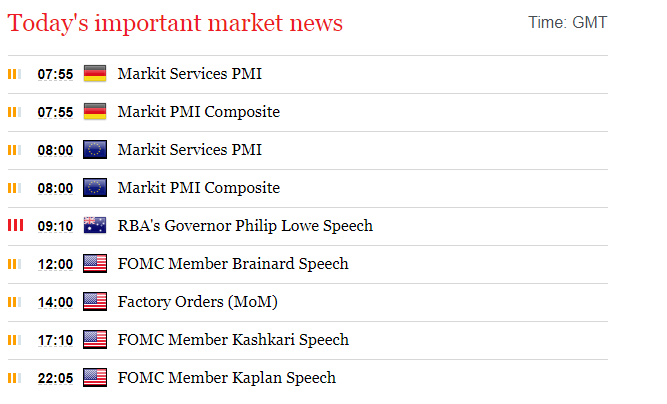