Data released on Friday showed US job growth accelerated in October after hurricane-related disruptions in the prior month, but a sharp retreat in average earnings and an increase in the number of people leaving the workforce caused concern on the robustness of the labor market. Nonfarm payrolls increased by 261K in October as 106K leisure and hospitality workers returned to work. This was the largest gain since July 2016 but below forecasts of an increase of 310K.

The data for September was revised to show a gain of 18K jobs instead of the previously reported decline of 33K. Average hourly earnings disappointed the markets, falling by 1%. The reduction results in the year-on-year increase dropping to 2.4%, the smallest since February 2016. In September earnings increased 0.5% lifting the annual increase in that month to 2.9%. Whilst the data was below forecasts, the job growth underscored the recent Fed statement that “the labor market has continued to strengthen” and has done little to change expectations of a rate hike in December. More upbeat data came in the form of the unemployment rate at 4.1%, a rate not seen in 17 years. President Trump tweeted after the data release “JOBS, JOBS, JOBS!” 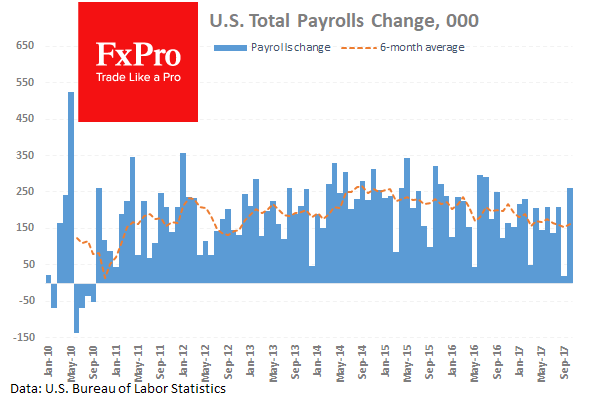 There was more “up-beat” jobs news on Friday, with Statistics Canada releasing data that showed the Canadian economy added 35,300 jobs in October, as the number of full-time positions swelled by 88,700, while part-time employment dropped by 53,400 jobs. The increase in jobs came as the unemployment rate increased to 6.3%, up from 6.2% in September, as more young people started looking for work. The positive news was short-lived as Statistics Canada also reported a $3.2-billion trade deficit for September compared with an initial estimate of $3.4 billion. The deficit was caused as both exports and imports dropped 0.3% – which signals demand is slowing – as many had anticipated for H2 after the stellar H1 performance.

EURUSD is little changed from Friday’s close. Currently, EURUSD is trading around 1.1612.

GBPUSD is little changed in early Monday trading at around 1.3072.

Gold is currently trading around $1,270.

At 08:15 GMT, Markit Economics will release Spanish Services PMI for October. Whilst not normally an impactful data release, the markets will be keen to see what impact the Catalan Independence vote has had on business sentiment in Spain. The forecast is for 55.5 down from September’s release of 56.7. A release wildly away from consensus could see EUR volatility.

At 08:55 GMT, Markit Economics will release German Services and Composite PMI for October. As the largest economy in the Eurozone, the markets will be looking for any indications that German business executives are still confident in the economy. Both releases are expected to come in unchanged with Services PMI at 55.2 and Composite PMI at 56.9. We can expect EUR volatility if the data is significantly off the consensus.

At 10:00 GMT, Eurostat will release the Year-on-Year Producer Price Index for September for the Eurozone. The consensus is suggesting a higher reading of 2.8% compared to the previous release of 2.5%. With higher prices, this upward inflationary pressure will provide more indications of a likely rate increase by the ECB sooner rather than later. Expect EUR volatility if the release is wildly different from the consensus.