G7 Finance Ministers, Canada CPI & Retail Sales, US Existing Home Sales – The day started out with the G7 Finance Ministers and Central Bank Governors meeting in Japan. I must admit I got the date of the meeting wrong:  while there was a welcoming dinner on Thursday, the formal meetings began today and finish up tomorrow. So we’ll get any statement and press conferences on Saturday, when the markets are closed. They’ll affect the markets at the opening on Monday. As I said before, I expect some kind of statement about how the G7 is against “excess volatility,” whatever that is, even if it’s only the Japanese delegates making the point. As a result USD/JPY could gap higher at the opening on Monday.

Then there’s nothing major on the schedule until the North American day starts up, whereupon the focus is on Canada. The market expects a drop in retail sales in March. This follows the drop in manufacturing and wholesale volumes during the month and indicates that the strong start to the Canadian economy this year is starting to fade. That could be negative for the CAD. 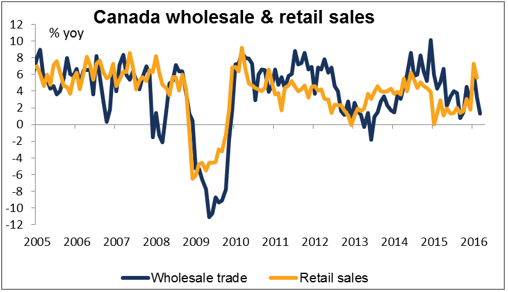 Canada’s CPI comes out at the same time. In isolation, these figures could have the opposite effect from the retail sales figures. They’re expected to show a sharp rise in headline inflation. And while core inflation is expected to fall slightly, it’s still around the Bank of Canada’s target. So taken by themselves these numbers might be bullish for CAD. However, I would say that they’re consistent with the market’s current view on Canadian inflation and it’s really growth, not inflation, that’s affecting the Bank of Canada’s stance nowadays. So I think the retail sales figures are likely to be more important than the CPI in determining CAD’s course.