Gary Cohn Resigns as Trump’s Chief Economic Advisor – Markets are in risk-off mode this morning, as news broke just after the US market close yesterday that Presidents Trump’s Chief Economic Advisor, Gary Cohn, resigned after a clash with the president due to the implementation of trade tariffs. Cohn was an advocate of free trade and his resignation will dent market confidence in the administration. This leaves an imbalance in the administration, with an unopposed cadre of officials supporting trade tariffs, which could lead to a trade war developing as protectionist policies take hold. USDJPY sold off to 105.500, S&P500 sold off to 2680.00 and the Dow moved down to 24500.00.

Canadian Ivey Purchasing Managers Index s.a.(Feb) data was released and came in at 59.6 with a consensus of 56.3 expected, against a prior reading of 55.2. Ivey Purchasing Managers Index (Feb) was released at 58.4, with a prior reading of 51.3. USDCAD moved lower from 1.29052 to 1.28745. The headline number exceeded expectations, hinting at a strong economy for Canada and was a turnaround compared to the last two months, where the data missed to the downside.

Australian RBA Governor Phillip Lowe delivered a speech titled “The Changing Nature of Investment” at the Australian Finance Review Business Summit, in Sydney. Some of the comments made were: Expect stronger growth in 2018 than in 2017 and a further reduction in unemployment. The Australian economy is moving in the right direction and he expects inflation to increase a little from its current low level. It is likely that the next move in interest rates will be up not down, however, there is no need for a change in policy adjustment. The AUDNZD moved up from 107.243 to 107.372 after the comments. It then declined to 106.887 in the three hours following.

US FOMC Member Brainard is delivered a speech titled “Economic and Monetary Policy Outlook” at New York University’s Money Marketeers event. She made the following comments: In relation to Trade wars, she said that there is uncertainty but it is too early to tell and the economic outlook has not changed. She said that material developments in international trade would be taken into account. She also said, in relation to leverage: household leverage remains relatively modest and credit spreads have been very tight, with leverage in the core banking system well contained. On rate hikes: continued gradual Fed rate hikes are likely warranted and global factors were impacting the long end of the yield curve. She said there was greater confidence that inflation will rise to the 2% target. On risks she said that persistently low inflation raises the risk that underlying prices have softened and falling unemployment raises the risk of financial imbalances; it is unclear how much labour slack remains. All in all, her comments were less dovish than usual but show that she is sticking with gradual rate hikes while watching the data for clues.

Australian AIG Performance of Construction Index (Feb) was released at 56.0 with a previous number of 54.3. This data point has remained in expansion above 50 since the March 2017 reading in what is the longest period of growth over the last decade. The peak was reached in August 2017 at 60.6. This shows a strong construction sector in what has been a difficult time of year historically for this data set.

At 10:00 GMT, Eurozone Gross Domestic Product s.a. (QoQ) (Q4) is expected to be unchanged at 0.6%. Gross Domestic Product s.a. (YoY) (Q4) is expected to be unchanged at 2.7%. This data could see moves in EUR currency crosses. The QoQ number has been holding steady at around 0.6% since 2017, showing stable growth across the Eurozone. The YoY number is also expected to remain on target at 2.7% but any variation in the result could see volatility increase in the markets.

At 13:00 GMT, US FOMS Member Bostic is scheduled to speak about the economic outlook, in Fort Lauderdale. Audience questions are expected and comments may affect the USD currency markets.

At 13:15 GMT, US ADP Employment Change (Feb) is expected to be 195K from 234K previously. USD crosses could be moved by this data. This data point has been holding steady around the 200 mark for much of 2017, with extremes at 300 above and 130 below over the course of the year. The data has remained above 100 since November of 2011, showing that the US jobs market is robust and performing steadily.

At 13:20 GMT, US Fed’s William Dudley is due to speak about the economic impact of the 2017 hurricanes, in San Juan. Audience questions are expected and comments may move USD crosses.

At 13:30 GMT, US Trade Balance (Jan) is expected to come in at $-55.1B against a previous $-53.1B. Unit Labor Costs (Q4) is expected to be 2.1% against a prior reading of 2.0%. Nonfarm Productivity (Q4) is expected to be unchanged at -0.1%. The US trade Balance is what much of the current global market uncertainty is based around. While this number is not generally a market mover, it will be watched for a change in trend if new trade policies are implemented. This data is then viewed over a longer period of time, with any one data point largely irrelevant.

At 15:00 GMT, The Bank of Canada Rate Statement will be released, along with the Interest Rate Decision, which is expected to remain unchanged at 1.25%. This could impact CAD crosses, with the Statement examined to pick out key phrases that could hint at future policy direction. This is a major market-moving event for Canada and the Canadian Dollar, with any shift in tone potentially sending the market in a new direction.

At 20:00 GMT, US Consumer Credit Change (Jan) is expected to be $17.90B against a previous $18.45B. USD pairs could see an increase in volatility around the time of this release. 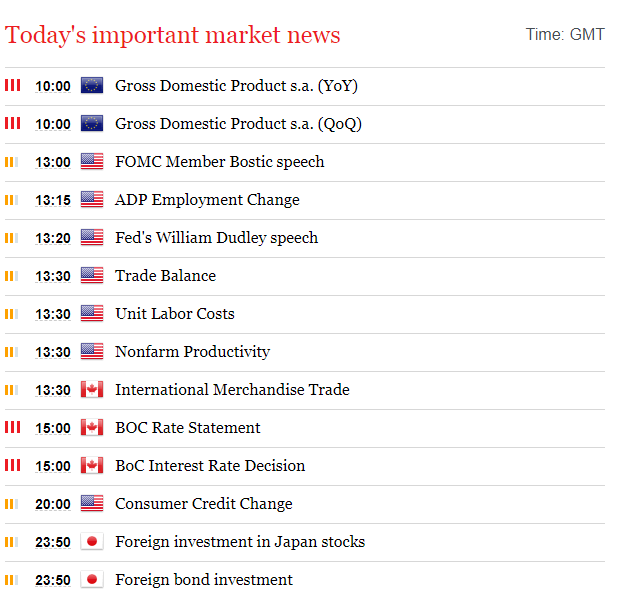