GBP News and Analysis – The British pound, which extended its declines from last week will be the currency in focus today as the payrolls report for August is due for release today. Economic releases from the US picks up from today starting with the import prices. Overall price action suggests volatility with some of the major currency pairs moving within a tight range, which could see a volatile breakout over the coming days. 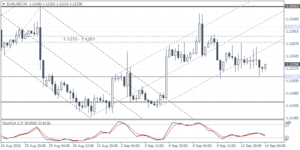 EURUSD (1.1225): EURUSD closed on Tuesday trading within the range from Friday’s high and low and marking a second day of the inside bar. The price congestion formed could see a strong momentum led a breakout in the near term. On the 4-hour chart, price action has broken out from the rising median line, but trading remains volatile. A move to the upside to retest the breakout could see EURUSD retest 1.1270 – 1.1280 resistance level of interest. A retest to this resistance could further confirm the downside towards 1.1200. Alternately, above 1.1280, EURUSD could be seen breaking above 1.1300. 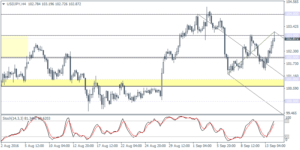 USDJPY (102.87): USDJPY managed to bounce off 102.00 support, but the price action remains inconclusive for the now with price trading near the 103.00 price level. A reversal here could see USDJPY resume its declines to mark the completion of the retest towards 101.00 – 100.80 support level. The downside bias remains invalidated if USDJPY breaks above 103.00 in which case further continuation in prices could see USDJPY rally towards 104.00. 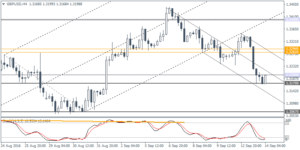 GBPUSD (1.3198): GBPUSD fell to 1.3200 support yesterday forming a bearish engulfing pattern on the daily chart. However, with price trading at the round number support, a near-term bounce could be expected. GBPUSD could stay range bound within 1.3400 and 1.3200 with the further direction being established on a breakout from these ranges. On the 4-hour chart, the price is seen trading near the 1.3200 – 1.3170 support level. A confirmed reversal here could see GBPUSD retest 1.3282 – 1.3294 resistance level. 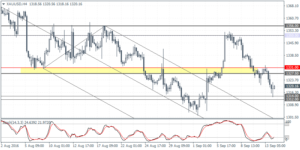 XAUUSD (1320.16): Gold prices extended their declines to test 1315.00 support level. The close below the doji indicates further declines towards 1300.00 and also invalidates the potential inverse head and shoulders mentioned previously. Near-term rebound off 1315 – 1312 support could see Gold prices retest 1327.50 – 1330 for resistance after the level failed as support. A retest from here could signal further downside to 1300.00 if the lower support fails to hold the declines.