Important Forex market news – On face value, the market is seeing this evening’s Fed decision as a non-event, the chance of an interest move being less than 20%. For next month, it’s nearer to 70%. The interesting thing is how the voting pattern will change. The September meeting saw three members dissent in favour of higher rates. Will they pull their vote for higher rates on the basis of the impending election?

Some may take that as a sign of a politicised Fed; others may take it as a sign that the Fed is aware of the potential economic impact of the outcome of the US election. But within this, the accompanying statement will be scrutinised for signs of a strengthening of the resolve to raise rates in the following month. Naturally dollar volatility risks are greater around the time of the announcement at 18:00 GMT.

Talking of the US election – it’s difficult to pull away from the subject – the narrowing of the polls has seen Trump marginally ahead in the latest Washington Post-ABC News tracking poll. The US election is not a national poll though, so things will be complicated on the night. Nevertheless, these latest developments has seen expected volatility rise in both equities and FX. 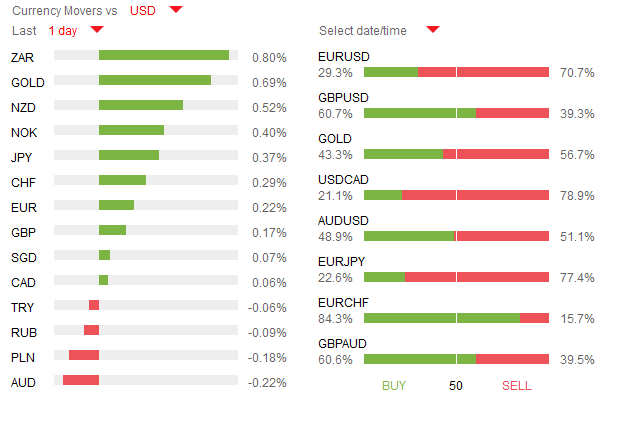 The dollar has weakened vs. the single currency and the yen, whilst gold has pushed ahead. So after the slumber that was setting in during most of October, the election is having an increasing impact on markets, something which is likely to remain in place between now and next Tuesday. There is little to distract on the data calendar between now and the Fed, but markets will be increasingly sensitive to US election developments through the day.