On Tuesday, Germany’s monthly economic sentiment index came in below market expectations. The ZEW Survey for Economic Sentiment cited a “strong decrease in expectations” as the index fell to 10 in August, down from 17.5 in July – causing a selloff in EUR.

News was rosier in the UK with the country posting its first July surplus in 15 years and defying expectations of another deficit. The Office for National Statistics reported a modest surplus in July. Whilst the data is positive, the markets reacted with a selloff in GBP likely indicating such positive news is an aberration.

In the US, markets reacted positively amid growing speculation that Trumps administration is gaining momentum in its efforts to reform the US tax code. It is on this issue that Trump hopes to finally secure a major legislative achievement and rebuild relations with his party. However, markets reacted negatively to comments made by Trump, late on Tuesday, that he would force a government shutdown if he does not receive funding to build his “infamous” wall.

The markets are focusing on the Jackson Hole conference later this week with scheduled speeches from Fed Chair Yellen and ECB President Draghi. The markets are looking for clues on the FOMC’s monetary policy and any new policy messages from Global Central Bankers.
EURUSD lost 0.5% on Tuesday, trading down to 1.17446. Currently, EURUSD is trading around 1.1760.

WTI was little changed overnight and currently trades around $47.70pb.

At 08:00 BST, A keynote speech will be made by ECB President Mario Draghi at the opening ceremony of the 6th Lindau Meeting on Economic Sciences in Lindau, Germany. Markets will be interested to hear any clues to ECB Economic Policy updates.

At 09:00 BST, Markit Economics will release Eurozone Manufacturing, Services and Composite PMI for August. Sentiment is expected to remain above 50 but forecasts are calling for a slight reduction from the previous release.

At 14:45, Markit Economics will release US Manufacturing, Services and Composite PMI for August. Similar to Eurozone PMI, markets are expecting releases in line with the previous release, with Services seeing a slightly better release of 54.9 compared to the previous 54.7.

At 15:30 BST, the US Energy Information Administration will release Crude Oil Stocks change for the week of August 18th. Another drawdown is expected of -3.375M, less than the previous -8.945M. 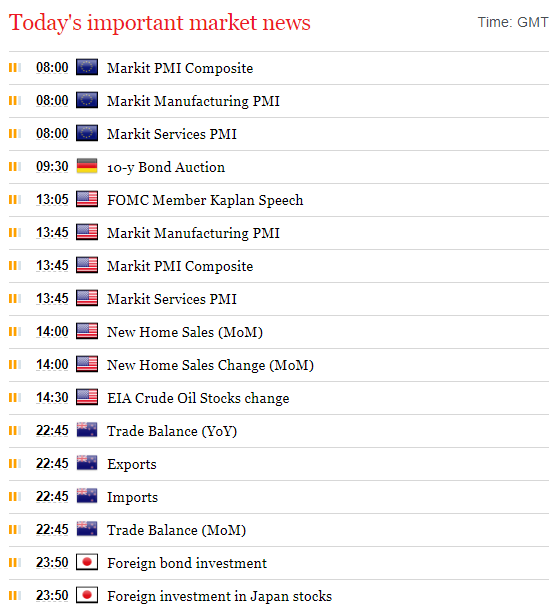