Oil – Gold Analysis – The WTI Crude Oil market fell significantly during the course of the day on Thursday, as we have now broke down below the $47 level. With that being the case, I feel that the market is probably continue to grind a bit lower but there is a lot of noise between here and the $45 handle. Because of this, the market will more than likely fall but should continue to offer selling opportunities again and again on short-term charts. After all, there will be a lot of volatility so having said that it’s likely that the market will try to get down to the $43 level. As far as buying is concerned, we are still very much in an uptrend, but at this point in time there is no supportive candle in order to base a trade to the upside upon. 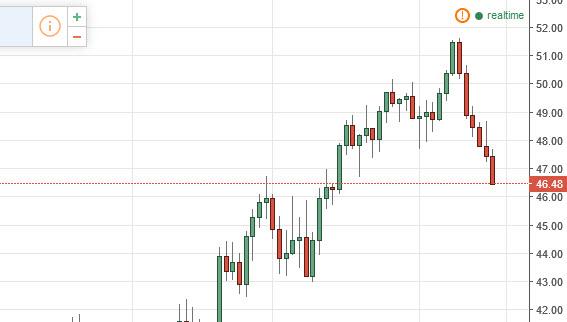 Brent markets fell significantly during the course of the session on Thursday as well, breaking through the support at the $48 level. There is the $46 level below that could be a target, and after that I believe that the $44 level will be targeted. At this point in time, short-term rallies could be selling opportunities based upon exhaustion, and that is essentially how the market looks as if it is ready to behave.Pay attention to the US dollar, and what it does next in order to trade this market. Quite frankly, the rising US dollar typically works against the value of the barrel of oil as it takes less of those US dollars to pick up that barrel of oil. The fact that we are closing towards the bottom of the candle suggests that we could have quite a bit of momentum to the downside as well. Ultimately, one thing you can probably count on in this market is volatility as there are a lot of concerns as to what the economic situation is around the world, which of course has a lot to do with the demand of crude oil markets. At this point, it looks as if the sellers are starting to take control.

Gold markets broke out during the course of the session on Thursday, clearing the $1300 level which has been a very significant barrier. Because of this, I believe that the market is going to continue to go much higher, as it is a significant move. However, there is the possibility that we pullback from time to time and that of course could offer a bit of value. As the world’s currencies continue to be very volatile, Gold makes a lot of sense as it is not only an “anti-dollar” currency, but it also looks at other currencies around the world such as the Euro and the British pound. The British pound of course is very much in focus as the EU referendum is coming up. With that being the case, the market will be essentially “buy only” at this point in time as there is obviously a very massive amount of bullish pressure underneath, and with that it is one of my favorite markets to be involved in.On top of that, we have a close towards the top of the range and that of course suggests that there will be plenty of momentum for the session today, but regardless there’s no way to actually sell this particular commodity at this point in time. The Federal Reserve has suggested that interest rates are going to stay low for very long time, and that of course should weaken the US dollar, which is the longer-term measuring stick of what should happen with gold. But with all of the quantitative easing around the world, gold is also going to rise against other currencies as well, it won’t just be the US dollar.I believe that we have entered a longer-term uptrend, and as a result we should see more and more buyers into the market as it has become increasingly obvious the gold is going off over the longer term. Ultimately, the $1300 level should end up being a bit of a “floor” going forward, with a massive amount of support near the $1280 level as well. 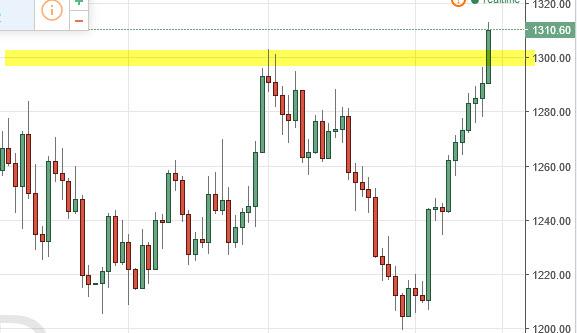