13:30 – US – PPI (MoM) (Nov) – The Producer Price Index (PPI) measures the change in the price of goods sold by manufacturers. The last 2 months have seen a drop in PPI due to weaker commodity prices. The final demand PPI is expected to be unchanged from October, a turnaround from -0.4% mom in October. A further decline might catch the Fed’s eye.

05:30 – China – Retail Sales, Industrial Production & Fixed Asset Investment (Nov)– Saturday’s data is expected to highlight how the government’s efforts to restructure the economy are impacting the economy:  retail sales are expected to rise 11.1% yoy, a slight acceleration from +11.0% yoy in October, while industrial production is expected to languish at  5.7% yoy, also a slight improvement from the previous month (5.6% yoy).

Outlook for ZAR: stay away!

I’ve been discussing the commodity currencies recently, with one big exception:  the South African Rand (ZAR). That’s because even though the South African economy is definitely dependent on commodities, its commodity mix is different than other countries and the behavior of the ZAR is different than that of the other commodity currencies. Today I’d like to discuss the ZAR and its outlook.

What moves the ZAR?

The following table shows the correlations between USD/ZAR and various commodities and other factors over the last five and 10 years. As you can see: 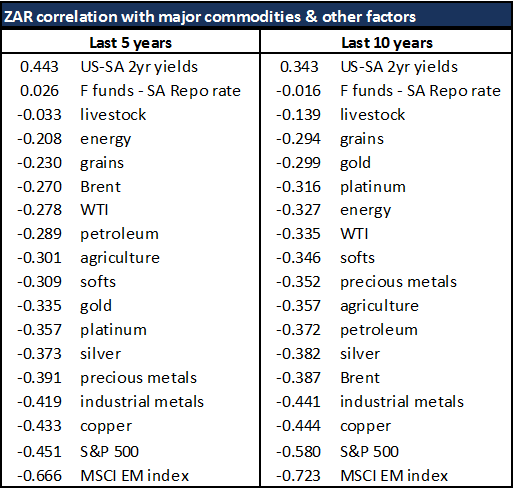 Looking at some of the academic research on the currency, it seems the more sophisticated indicators have a better record of forecasting. A paper by the economist Jeffry Frankel finds that “an index of the real prices of South African mineral commodities“is a key determinant. “In other respects, the rand behaves like currencies of industrialised countries with well-developed financial markets. In particular, high South African interest rates raise international demand for the rand and lead to real appreciation, controlling also for a forward-looking measure of expected inflation and a measure of default risk or country risk.”