The market already knows the results of the Bank of Japan Policy Board meeting that took place overnight.

EU (UK) – EU Summit:  The second day of this two-day meeting. UK PM Cameron hopes to bring up his demands for renegotiating Britain’s membership in the EU at this meeting, rather than at the next one in February. If agreed, the document would form the basis for Cameron’s in/out referendum, which has to be held by the end of 2017 but could take place as early as next summer.

13:30 – Canada – CPI / Core CPI – The Bank Of Canada is as focused on inflation as any other central bank. The main concern for them will be the effects of a lower oil price. Having recently held rates at current levels, any weakness in this data will possibly renew calls for a cut in interest rates.

EU – Spanish General Election— ‎The election is likely to deliver an unprecedentedly fragmented Parliament. The country has been governed by one of the two major parties for more than 30 years, but this time, the left-wing Podemos Party and the pro-business Citizens Party threaten to deny any party a majority. Given the stunning result of the recent elections in France and Poland, this election will be closely watched.

The ECB grabbed the headlines earlier this month when it eased policy, albeit not by as much as the market had expected. Attention this week has of course been focused on the Fed’s momentous decision to raise rates for the first time in nine years. At the same time, the People’s Bank of China (PBoC), while not making any similarly huge announcement, may be implementing its own change in FX policy – a change that has the potential to be nearly as important for the FX markets as what the Fed and ECB are doing.

The PBoC operates what’s called a “managed float,” in which it allows the currency to move vs the dollar within a certain band that it determines.  USD/CNY kept fairly steady during the run-up to the IMF’s announcement that the currency would be included in the IMF’s Special Drawing Rights (SDR). However, recently USD/CNY has moved higher (i.e., CNY has weakened against the dollar) for 10 consecutive days, or 36 out of the 48 trading days since mid-October. Just in the last 10 days the currency has fallen by 1.3%, a sizeable decline for a managed currency. 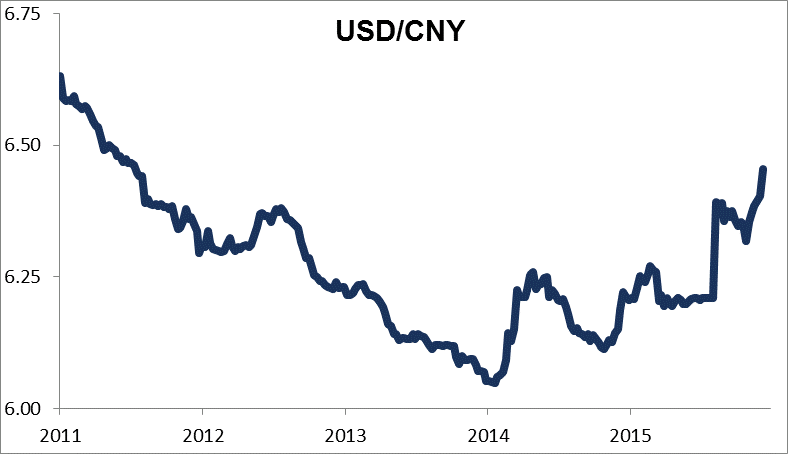 Back in August the government surprised the market by devaluing the currency. However, the weakness now seems to be driven by the market. The CNH, the external version of the renminbi, which trades freely, has generally been weaker than the CNY since the August devaluation. Thus the PBOC seems to be acceding to market movements rather than actively weakening its currency.