UK PM May gave a prepared speech on Friday on Brexit progress and ongoing negotiations with the EU. Of particular interest was her policy on trade regulations and the Northern Irish border. In that regard, one of the takeaways from her statements was that there is an option for a customs partnership between the EU and the UK. She said that to avoid a hard border, an agreement on customs was needed.

The best option involved a highly streamlined customs arrangement with simple requirements for the movement of goods. She promised that the UK would maintain the high standards of the EU including maintaining environmental standards to a level at least as high but also wanted flexibility on this and the fisheries policy. In her speech, she made it clear that the level and type of market access of some services will not be the same as pre-Brexit. Her key tests for Brexit success were:

1. Implementing the decision of the British people
2. Reaching an enduring solution
3. Protecting security and prosperity
4. Delivering an outcome consistent with the kind of country we want to be
5. Strengthening the Union

“I want to be straight with people – we all need to face up to some hard facts’ – ‘in certain ways our access to markets will be less than it is now’ – we can’t have all the benefits without all the obligations”.

UK Construction PMI (Feb) was released and came in at 51.4 v an expected 50.5, with a prior number of 50.2. This data is based on a survey of purchasing managers, with a reading above 50 indicating expansion and below 50 indicating contraction. This number has been trending down since a high of 64.7 in February 2014. GBPUSD moved lower from 1.37876 to 1.37606 upon this data breaking. It can see a seasonal pick up around this time, heading into summer and due to increased construction activity but like-wise, any failure for this to take place could indicate a downturn in the sector.

Eurozone Producer Price Index (YoY) (Feb) was 1.5% v an expected 1.6%, from 2.2% previously. This data represents the change in the price of finished goods and services sold by producers. A number lower than the consensus shows that the value of goods has decreased but represents a saving for consumers. EURUSD moved higher after this release from 1.22741 to 1.22979.

Baker Hughes US Rig Count numbers were released, with the headline number coming in at 800. The prior number last Friday showed that there were 799 Oil rigs in operation. WTI Oil traders pay close attention to this number as they look to the week ahead, with an increase from the prior week showing an expansion and indicating an increase in the volume of crude oil drilled. In the context of supply and demand, this would mean an increase in supply. The Number of operational rigs has not been at the 800 level since 2015.

PMI – Purchasing Managers Index Data will be released for various economies around the world today. The Index is used to gauge the level of business conditions including employment, production, new orders, prices, supplier deliveries, and inventories, by compiling surveyed data from purchasing managers. A reading below 50 indicates contraction in the industry while above 50 indicates growth. This data is important due to the link with interest rates. In the current stage of the economic cycle, it can be a warning for inflation increasing, which has caused selling in risk assets recently.

Major data releases for the week ahead:

On Tuesday at 03:30 GMT, the RBA will release Australian Rate Statement and Interest Rate Decision.

On Wednesday at 10:00 GMT, Eurozone GDP data will be released.

Later at 15:00 GMT, the BOC will release the Canadian Rate Statement and Interest Rate Decision.

On Thursday at 12:45 GMT, the ECB will release the Eurozone Interest Rate Decision and Deposit Rate Decision with a press conference and the Monetary Policy Statement at 13:30 GMT.

On Friday at 04:00 GMT, the BOJ will release the Japanese Interest Rate Decision and Monetary Policy Statement. They will also hold a press conference.

At 13:30 GMT, US Jobs data will be released for February. 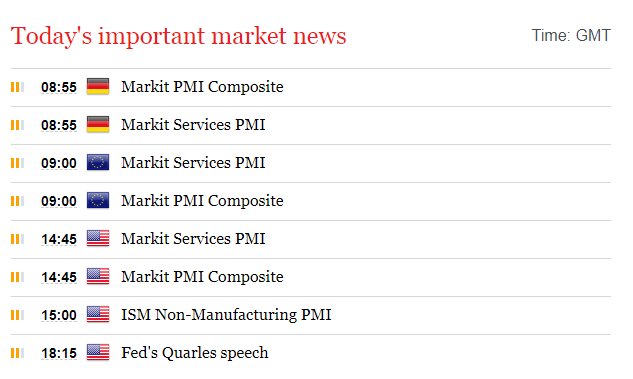