Further Strong Data From the US

On Wednesday, the US Institute for Supply Management (ISM) released Non-Manufacturing PMI for September that surprised the market with the US service sector index increasing to its highest level in more than 12 years. The ISM non-manufacturing index, for September, climbed to its highest level since August 2005 and the prices paid index reached its highest level since early 2012. Such strong data gives more substance to a rate hike in December. The latest CME FedWatch Tool shows an 83% probability of a December rate rise, up from 78% on Tuesday.

Further strong data came from the US ADP Employment Change for September that was released on Wednesday. 135,000 new jobs were added by private employers, beating the forecast of 125,000. The increase surprised many, as the markets had expected the recent hurricanes to have been detrimental to the job market. The ADP report further underscores the strong US labour market and the markets will now be looking for confirmation of its strength with this Friday’s Non-Farm Payroll report.

Data released on Wednesday, from the US Energy Information Administration (EIA), showed US crude stockpiles fell 6.02M barrels to approximately 465M barrels last week, the biggest drop since mid-August. In addition, crude exports rose to 1.98M bpd last week, overtaking the previous weeks record of 1.5M, its 4th consecutive weekly gain. With Libya purportedly resuming output at its Sharara oil field, the increase supply has resulted in WTI edging lower. However, the market is expecting a degree of stability in prices as suggestions abound that Saudi Arabia and Russia would extend production cuts. Russian President Putin stated on Wednesday that “a pledge by the Organization of the Petroleum Exporting Countries (OPEC) and other producers, including Russia, to cut oil output to boost prices could be extended to the end of 2018, instead of expiring in March 2018”.

GBPUSD Had little reaction to Prime Minister Theresa May’s address to her Party Conference. Currently, GBPUSD is trading around 1.3235.

WTI fell on the back of the latest EIA report and is currently trading around $50.15.

At 06:30 BST, The Reserve Bank of Australia Assistant Governor Guy Debelle is scheduled to speak.

At 12:30 BST, the ECB Monetary Policy Meeting Accounts will be released. The accounts provide an overview of financial market, economic and monetary developments. It’s followed by a summary of the discussion, in an unattributed form, on the economic and monetary analyses and on the monetary policy stance. 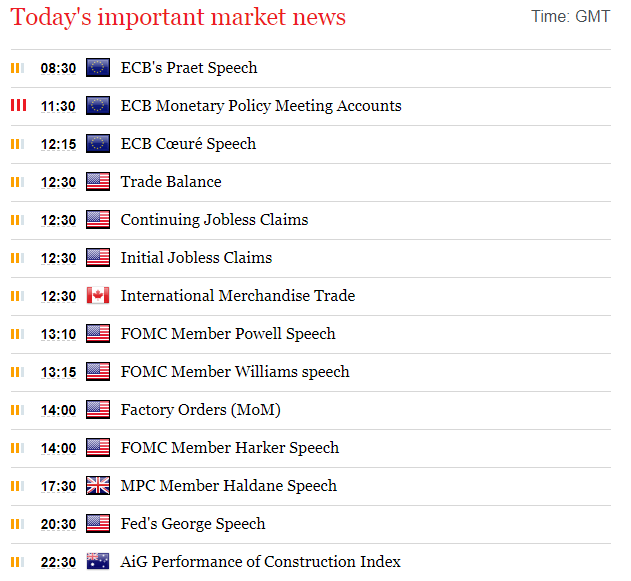