A Stronger Picture for the UK?

North Korea fired another missile over Japan into the Pacific Ocean on Friday. The regimes defiance towards recent UN sanctions has had a mooted effect on the markets as many are growing accustomed to Pyongyang’s actions.

In an unsurprising move on Thursday, the Bank of England’s Monetary Policy Committee voted 7-2 to keep UK interest rates at 0.25%. The minutes of the meeting commented that there is a “slightly stronger picture” for the UK Economy with a strong labour market, continued housing demand and the recent improvement in retail sales. Such rhetoric has many believing that, if wage growth continues to rise, the possibility of a rate hike may occur earlier than expected. Following the meeting, GBPUSD rose over 1.4% to reach 1.34038 – a level last seen 12 months ago.

On Thursday, data from the US Labour Department revealed a rise to 0.4% in August in the Consumer Price Index – bettering July’s insipid 0.1% increase. Core CPI is running at 1.7%, which is likely to provide some much-needed assistance to the Fed and its 2% inflation target. Following the data release, the likelihood of a US rate hike in December increased to 50.9% from 41.3%, per CME#’s FedWatch Tool. More data showed the US Labour market staying strong, as initial claims for unemployment benefits declined 14K. The seasonally adjusted rate of 284K (week ending September 9th) is below the 300K threshold for 132 weeks – the longest such run since 1970. The strong labour market appears to be helping, finally, push inflation higher. Market focus will now center around next week’s FOMC meeting for more clues on US economic policy and the timing of tightening in the months ahead.

EURUSD climbed, after hitting a 2-week low on Thursday, to currently trade around 1.1920.

USDJPY is little changed and currently trades around 110.40.

GBPUSD hit a 1-year high on Thursday and has maintained upwards momentum overnight to currently trade around 1.3410.

Gold was relatively flat and currently trades around $1,330.

WTI slipped overnight, after gaining over 1% on Thursday. Currently, WTI is trading around $50.20.

At 11:00, Eurostat will release Eurozone Trade Balance for July. Consensus is suggesting €21.4B from the previous release of €26.6B. With relatively good economic growth in the Eurozone the markets will likely only react if the data is significantly different than expected.

At 13:30, the US Census Bureau will release the “much anticipated” Retails Sales (MoM) report for August. The previous strong reading of 0.6% is not expected to be beaten with the release today – consensus is suggesting a figure of 0.1%. As a good indicator of consumer spending, the markets will be hoping that the release stays in positive territory. A negative release will cause a weakening in USD and add volatility into the markets. 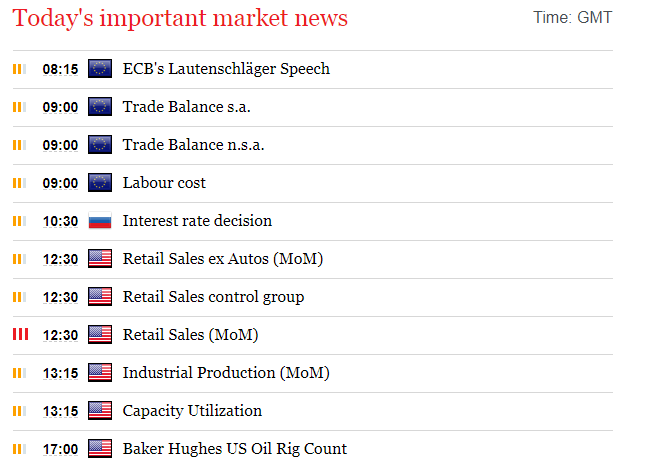