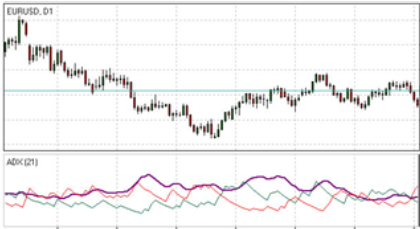 Average Directional Index (ADX) developed by Welles Wilder is a technical indicator which is designed to determine
trend strength and further possible price movements. This is done by comparing the difference between two

consecutive highs and the difference between lows.

Actually the direction of indicator which is marked by bold line is believed to reflect the strength of current trend:

If the ADX rises (usually surging above 25)this implies strengthening market trend.
If the ADX falls this implies that trend development is doubtful. If the value is below 20 it is a sign of neutral
trend.

Moving Average is an instrument of technical analysis which displays the average price during a certain period of time. It is used to smoothen price fluctuations and determine the strength and direction of trend.Based on the method of averaging, it’s possible to distinguish between three types of moving averages:
simple moving average (SMA),smoothed moving average (SMMA) and exponential moving average (EMA). 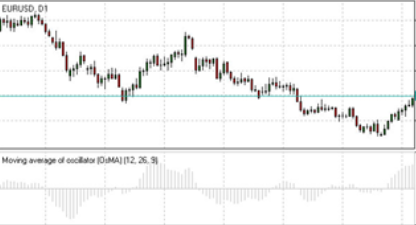 Moving Average of Oscillator (OsMA) is an instrument of technical analysis which shows the difference between
the oscillator (MACD) and its moving average.
Changing the direction: (Forex osma indicator)
• If OsMA stops falling and starts rising there may be a sign of bullish reversal.
• If OsMA stops rising and starts falling there may be a sign of bearish reversal.

Parabolic indicator developed by Welles Wilder is designed to realize a number of functions:
rejecting or confirming trend direction, determining trend end, correction or flat stages, and indicating possible exit
points.The indicator is based on the principle “stop and reverse” (SAR).

Signals of trend confirmation (How to Use Parabolic Indicator in Forex)

•The indicator confirms an uptrend if it is  plotted below the price chart.

• The indicator confirms a downtrend if it is  plotted above the price chart.

• A sign of closing long positions may appear if the price falls below Parabolic line during an uptrend.
• A sign of closing short positions may appear if the price rises above Parabolic line during a downtrend.
How to calculate the Parabolic ?
P(t) = P(t-1) + AF x (EP(t-1) – P(t-1)),
where:
P(t) – current value of the indicator;
P(t-1) – value of the previous period;
AF – acceleration factor, generally rising from 0.02 to 0.2 with a step of 0.02;
EP(t-1) – Minimum/ maximum price value of the previous period.

Source: IFC Markets Broker -Review and Forex Rebates Up to 85%