The U.S. dollar closed slightly bearish yesterday with price action staying a bit muted for the most part on the lack of any fundamental drivers in the markets. Looking ahead, it will be a busy day for the greenback as traders look to the final third quarter revised GDP estimates.

Forecasts point to another upward revision on the GDP, expecting a 3.3% revised print, slightly higher from the 3.2% estimates from the second revision. Durable goods orders are also coming out later today and expected to show a 0.2% increase on the core, while the headline print is expected to show a 4.9% decline, which could spell some short term weakness in the buck. 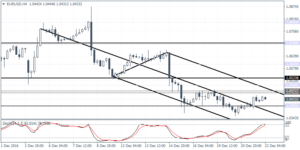 EURUSD (1.0433): EURUSD bounced off the 1.0400 handle yesterday, but the price action has been rather sloppy. The Stochastics Oscillator on the daily chart remains oversold which highlights the risk of a short squeeze amid thin trading as the markets enter into the final trading week of the year. In the near term, EURUSD is likely to continue its slow approach to the 1.0472 – 1.0462 minor resistance level. Note the potential inverse head and shoulders pattern that could be formed on a retest of this resistance level which means that another dip is likely where the right shoulder could be formed. 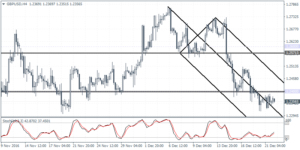 GBPUSD (1.2356): GBPUSD has been trading flat with price action muted below the 1.2400 level which could be tested for resistance in the near term. This opens up the downside in GBPUSD towards 1.2250 – 1.2224 support. In the medium term, a correction towards 1.2571 remains on the card and the anticipated decline to 1.2250 – 1.2224 could offer a potential buying opportunity in the cable. 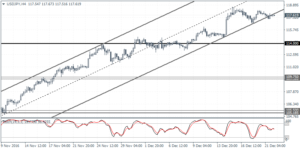 USDJPY (117.61): USDJPY continues to post a consolidation near 118.00 handle with the Stochastics on the daily chart staying firmly above the overbought level of 80. This increases the risk of a whipsaw in the near term as USDJPY could push higher to squeeze out any potential short positions while also trapping any weak long positions near the 118.00 – 118.50 region.

The support at 114.00 looks increasingly likely as a price level that USDJPY could retest. On the 4-hour chart, the dollar has failed to post a close above 118.43 – 118.50 resistance zone and the trend in the H4 time frame points to an inclined head and shoulders pattern with the recent right shoulder formed just a few pips below 118.43. Therefore, look for a break out below 117.00 which could signal a decline to 114.00.