On Thursday, the UK Office for National Statistics released Q2 GDP showing that it increased 0.3%, unrevised from the preliminary estimate. The latest pace of growth was slightly better than the 0.2% expansion posted in Q1. However, there was a slowdown in both UK household spending and business investment. Year-on-year, GDP growth came in at 1.7%, in line with market forecasts. Consumer spending growth slowed to 0.1%, its worst since Q4 of 2014.

The US Labour Department released Initial Jobless Claims, showing that initial claims for state unemployment benefits increased 2K to a seasonally adjusted 234K for the week ended Aug. 19, which was in line with expectations. The release marks 129 consecutive weeks where claims have been below 300K (regarded as the threshold of a strong labour market). Markets are generally quiet as they await key speeches from Central Bankers at the Jackson Hole Symposium later today. The markets do not anticipate any major statements, but they will be scrutinizing any comments for any signs that could indicate a change in policy in the months to come. The CME FedWatch tool has expectations for a rate hike in December at just 37.6%.

USDJPY made a slight recovery on Thursday. Currently, USDJPY is trading around 109.60.

GBPUSD was also little changed on Thursday, currently trading around 1.2810.

Gold remains in a tight trading range, currently trading around $1,287.525.

At 09:00 BST, The CESifo Group releases German business sentiment index (IFO). IFO – Business Climate, Expectations & Current Assessment for August will all be released. Consensus calls for slightly lower figures in all 3 releases compared to the previous data. If the data is significantly lower it is likely the markets will sell EUR – the converse being true also.

At 17:00 BST, Fed Chair Janet Yellen is scheduled to speak at the Jackson Hole Symposium.

At 20:00 BST, ECB President Mario Draghi is scheduled to speak at the Jackson Hole Symposium. 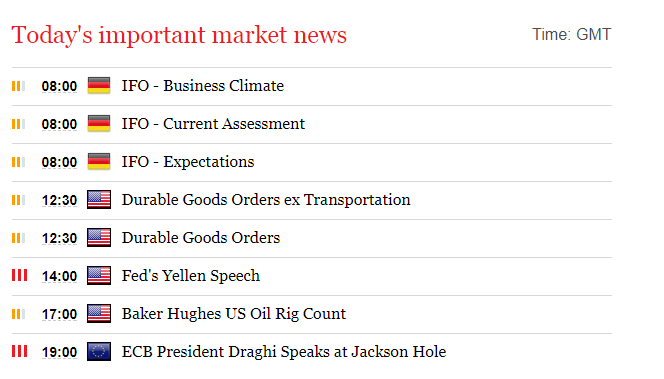