UK Retail Sales – The Chinese philosopher Lao Tzu said, “By doing nothing, everything is done.” That may be the theme of the week as four major central bank meetings – US, Japan, Switzerland and Britain – are expected to result in no change in policy. But as always, the statements following the meetings will be subjected to microscopic analysis.

All the central banks must be considering what the impact would be if they disturbed financial markets a week before the Brexit vote. It’s said that the importance of a decision is how easily it can be reversed. Even if the US elects President Trump, that decision could be reversed four years later, but the impact of Britain leaving the EU would last much, much longer. That makes it an enormous decision and argues against any change in policy by the major central banks this week. 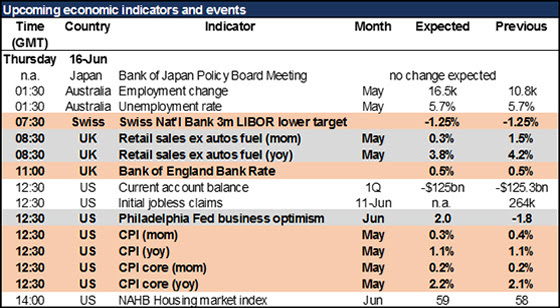 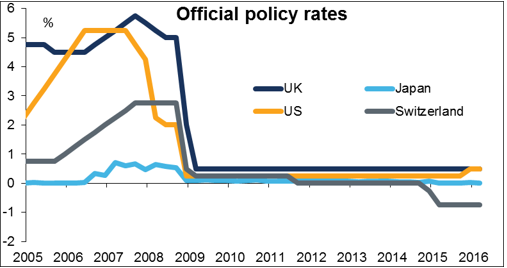 The Fed leads off and as always is the major event. The question is not whether they will move, but rather what will they imply about the possibility of moving in July or later. Will the FOMC do as they did last October, when they spelled out what they would need to see in order to raise rates at their next meeting? And what will they do with the line in their first paragraph that mentions “strong job gains”? Even with no change in rates, there will still be plenty of room for the statement to move the markets as they reshape expectations about the future course of policy.

The Bank of Japan retains the capacity to surprise, but I don’t think many people expect them to change policy this time. True, they’re still unable to meet their inflation goal and the yen is strengthening, but on the other hand, public resistance to even the current measures is growing and the ruling Liberal Democratic Party left out any mention of monetary policy from last week’s policy statement. With USD/JPY stabilizing, I think they’ll stay on hold.

For Switzerland, the main point is that EUR/CHF is virtually unchanged since its last meeting on 17 March. The country still has deflation, but it’s ameliorated since earlier this year. Besides, things in Switzerland are so preternaturally expensive that they really should be falling. After the last SNB meeting in March, EUR/CHF tried to rally but wound up falling about 20 pips.

The Bank of England has a difficult job a week before Brexit. Most of the data since their last meeting has been weak, so if anything they are likely to sound more concerned and less in a rush to raise rates after the Brexit vote (assuming it’s “Remain”) than they were before. In that case, GBP could weaken after the news. Last month there was some volatility in GBP/USD following the meeting, but by the end of the day it was virtually unchanged from where it started from.

Elsewhere, get ready for a deluge of data from China. Industrial production, retail sales and fixed asset investment all came out on Monday morning (after this column was written) but we still (maybe) have foreign direct investment, money supply and aggregate financing to wait for. The money supply and financing figures will help resolve the question of whether the government is going to let the economy down slowly by backing off the stimulus or fight the slowdown as long as possible. The end point is likely to be the same, just the path will differ.

Source: Fxprimus Forex Broker (Review and FX Rebates Up to 85%)