The Federal Open Market Committee (FOMC) June statement brought no surprises three weeks ago. The U.S. benchmark interest rate remained unchanged at 0.50 percent. Fed Chair Janet Yellen said that the then upcoming Brexit vote was a factor. The risk became a reality in the three-week lag between the rate announcement and the publication of the notes from member comments during the monetary policy meeting last month. The minutes will be published on Wednesday, July 7 at 2:00 pm EDT.

The shocking United Kingdom vote results on the European Union referendum are still coursing through the market. The British pound has hit 31-year lows and triggered volatility in global markets. The USD has appreciated for the most part as investors look for a safe haven although risk appetite has tried to make a return on a couple of occasions since the Brexit outcome was known.

The caution shown by the Fed last month was validated by the UK EU referendum outcome. Fed members knew that the worst possible outcome would have been a rate hike followed by a game changing decision by British voters. The Fed is in no urgency to enact monetary policy decisions, no so the central banks of England, Europe and Japan. There are no surprises expected in the June FOMC minutes, unlike the different comments found in April that put a June rate hike back on the table. Even before Brexit some Fed members were turning dovish on the path of future rate hikes and in the aftermath even a rate cut before the end of a year is a possibility. 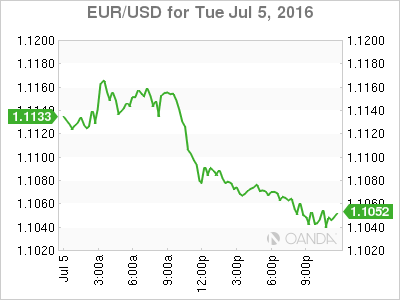 The EUR/USD lost 0.79 percent in the last 24 hours. The pair is trading at 1.1069 after American markets rejoined the fray after the Fourth of July holiday. Brexit anxiety fuelled a flight to safety with the USD gaining amongst major pairs with the exception of the Japanese yen.

Chair Yellen said in her last press conference that all FOMC meeting were live. Post-Brexit it is hard to envision a rate hike in the short term and for some analysts it will come in 2017.

The U.S is not immune from political risk with the upcoming presidential elections in November. Chair Yellen said in June that markets should not be surprised by a rate increase ahead of presidential election. The whole time Mrs. Yellen made sure to impress on the audience the willingness to act by the Fed if economic activity warrants higher rates. Press conference or no. It will be easy to add that this could include a rate cut, if Brexit has indeed triggered another global recession forcing the Fed to ease once again.

On the European radar are dropping bond yields in particular those of Italy. Italian banks are under pressure as non-performing loans rise and political risk is rising after Prime Minster Matteo Renzi is aiming to put to a referendum the reforms needed to improve financial system. If rejected that would spell the end of his government and new elections would be needed 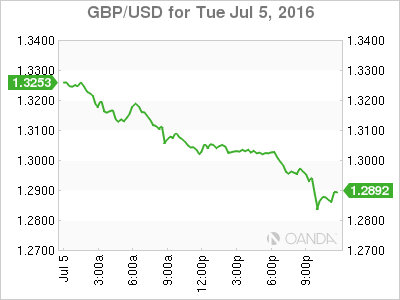 The GBP/USD lost 1.983 percent in the last 24 hours. The currency pair is trading at 1.3029 as investors continue to sell the GBP as Brexit fears grip global markets. Risk aversion has boosted the USD versus the GBP pushing it to 31 year lows only to recover slightly as the trading session wore on. The release of the UK’s services PMI did the pound no favours coming in at 52.3 when the forecast called for 53.1. The leading indicator is back to the May 5 reading and could further signal the deterioration of business confidence after the vote to break way from the E.U.

The market will be focused the U.S. non-manufacturing PMI and later in the day the minutes from the June FOMC. Political uncertainty in the United Kingdom where Brexit has already cut short the careers of more than 3 politicians appears to be more stable with Theresa May leading the first round in the leadership race by winning 165 MP votes from a total of 330. U.S. employment data will be the highlight of the week but that won’t start rolling in until Thursday with the ADP payrolls and the unemployment claims before the much awaited U.S. non farm payrolls (NFP) report due on Friday.

Market events to watch this week: