US Data Fails to Impress

On Friday, the US Commerce Department released Retail Sales showing a drop of 0.2% in August, the biggest decline in 6 months. The markets had expected a decline resulting from both Hurricanes Harvey and Irma. The Commerce Department commented that it could not isolate the impact of Hurricane Harvey on retail sales, it did receive indications from companies that the hurricane had “both positive and negative effects on their sales data, while others indicated they were not impacted at all.” Whilst Harvey may have had an impact on August data, June and July data were revised lower suggesting US consumer spending has slowed down.

The Federal Reserve released Industrial Production for August on Friday showing a decline of 0.9% – the biggest decline since May 2009. The Fed is attributing as much as 0.75% to Harvey, as Gulf coast oil and natural gas production was stopped. The markets are expecting that September’s Industrial Production will also be negatively impacted due to Irma.

The tension resulting from North Koreas continued missile testing, and Pyongyang’s defiance in the face of international condemnation, is causing concern in the markets. North Korea’s official state news agency, KCNA, has added to concerns by calling for a break up in the UN Security Council which they see as a “tool of evil”. In further rhetoric, KCNA has threatened to “sink” Japan and reduce the USA to “ashes and darkness”. US Secretary of State Tillerson recently stated that the U.S. “seeks a peaceful resolution but is prepared to use military force if diplomatic efforts fail to end the nuclear standoff with North Korea”. This, as President Trump is scheduled to make his first address before the United Nations on Tuesday. The markets expect more rhetoric from the US and North Korea.

The Federal Reserve meets Tuesday and Wednesday to discuss monetary policy where many believe they will announce the start of the reduction in the Central Banks massive balance sheet. Later in the week, the Bank of Japan will meet to discuss Japanese monetary policy with many expecting no change in their stance. This week marks the final week before the German General Election on September 24th and the New Zealand General Election on September 23rd. Today is a Public Holiday in Japan.

USDJPY has moved higher from Friday’s close to currently trade around 111.35.

Gold gave back recent gains, as risk-on sentiment has improved. Currently, Gold is trading around $1,316.

WTI has been buoyed by higher demand, resulting in a 5% gain last week. Currently, WTI is trading around $50.50.

At 10:00 BST, Eurostat will release Eurozone Consumer Price Index & Core (MoM & YoY) for August. Core CPI is forecast to come in at 1.2%, a slight decline from the previous release of 1.3%. YoY CPI is expected to remain at 1.5%. Eurozone inflation appears to be restrained, but any major change from the forecasts will see EUR volatility in the markets. 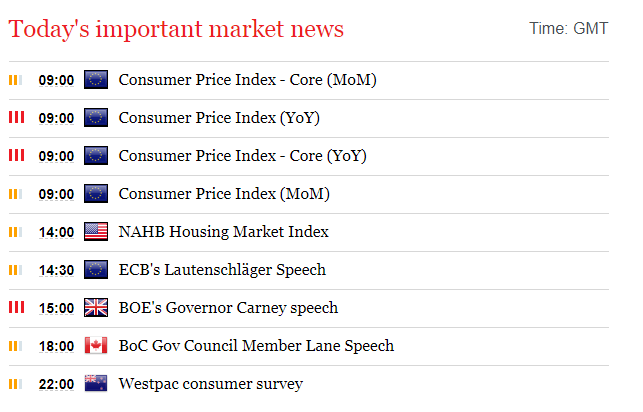